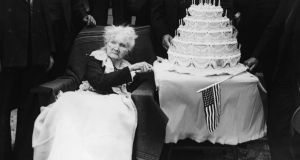 The naming of Cork born Mother Jones beside Ernesto Ché Guevara, Mahatma Gandhi and Leon Trotsky among the world’s greatest revolutionaries is testament to her growing historical stature, according to one of the organisers of a festival held in her honour in her native city.

According to Ger O’Mahony of the Cork Spirit of Mother Jones Festival, the inclusion of Mary Harris, aka Mother Jones, in The Observer list of the world’s top 10 revolutionaries is a welcome recognition of her achievements as a labour activist and campaigner in the United States.

“As one of just two women and the only person born in Ireland named in The Observer list, it is clear that she is emerging forcefully from the shadows of history to take her rightful place alongside James Connolly as an inspirational figure in the international labour movement,” he said.

Born in Cork in 1837, Mary Harris emigrated, first to Canada and, then to the United States, where for over a 40-year period from 1871, she immersed herself in the struggles of American miners earning herself the sobriquet “the most dangerous woman in America”.

“Pray for the dead and fight like hell for the living,” became her catch-cry as she campaigned all over America for better conditions for workers and, as part of her campaign for the abolition of child labour in 1903, she led a march to the home of then President, Theodore Roosevelt

Aside from Mother Jones, Edinburgh-born 1916 leader James Connolly also made The Observer list and Mr O’Mahony pointed that Connolly met the Corkwoman in America in the early 1900s when both were very active in the labour struggles which convulsed the country in the early 20th Century.

Mr O’Mahony said her inclusion in the list was a filip to everyone involved in The Spirit of Mother Jones Festival which is held annually near her birthplace in Shandon and which seeks to encourage people to learn more about the Cork born activist and her struggle for social justice.

“Cork has always been known as the “Rebel City” and this reputation has certainly been enhanced internationally by having a native daughter, Mother Jones named as one of the 10 Best Revolutionaries in the world alongside ‘Che’ Guevara, Mahatma Gandhi and James Connolly.

“Her fiery oratory, her leadership qualities, her passion for labour rights, her opposition to child labour and her utter fearlessness against oppression mark out Mother Jones as a true rebel and an exciting and colourful woman in whom all Cork people and Irish people can be extremely proud. “