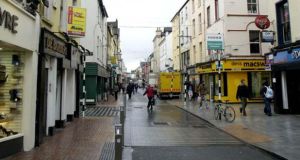 Cork has fought off the challenge of London and Liverpool to see its second street, Oliver Plunkett Street win a major award for the best street in the UK and Ireland.

Oliver Plunkett Street was one of three finalists competing for the The Great Street Award 2016 along with Deptford High Street in London and Cairns Street in Liverpool.

But the judges at the Academy of Urbanism in the UK have chosen Oliver Plunkett Street as the winner – coming exactly 300 years since the street was originally laid out in 1715.

The Lord Mayor of Cork, Cllr Chris O’Leary welcomed the prestigious award- the first time the award has been won by an Irish city - as a “real coup for Oliver Plunkett Street and Cork.

He noted the expert group looked at the social, cultural economic, political and physical development of villages, towns and cities across the UK, Ireland and Europe.

“They recognise the most enduring and improved urban environments and we are absolutely thrilled that Oliver Plunkett Street is now listed as their Great Street of 2016,”he said.

Geoff Haslam, lead assessor for the Academy of Urbanism said the judges were overwhelmed by Oliver Plunkett Street as it offered everything they were looking for in ‘a Great Street’.

“We sometimes have to search for the DNA of a street, but Oliver Plunkett Street exudes it - it’s a vibrant living street and community, full of little surprises,” he said

Fellow assessor, Alastair Barr said that in the six years of judging awards, Oliver Plunkett Street had really “raised the bar” for the other two finalists in Liverpool and London.

The group behind entering the Cork street in the competition, the Plunkett Street Quarter said they were delighted to receive the award just two years after their establishment.

Founder member, Valerie Finnegan Cahill of IKON Hair Design said they were “absolutely delighted” and they were all extremely proud of the historic yet contemporary street.

Ms Finnegan Cahill paid tribute to the traders, Cork City Council and the Cork Business Association who had collaborated closely on the project to secure the win for Cork.

1 WHO warns of potential for ‘immediate second peak’ in Covid-19
2 Archaeologists are ‘quite sure’ they have found Red Hugh O’Donnell’s burial place
3 Coronavirus: What will reopen in Ireland’s phases to ease restrictions and what are the dates?
4 Coronavirus: No new Covid-19 deaths reported in State for first time since March
5 Tributes paid to Ireland’s deputy ambassador to China who died on Sunday
Real news has value SUBSCRIBE