Community devastated by killing of Larry and Martina Hayes 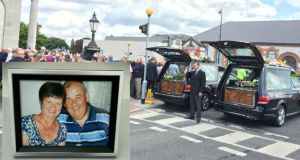 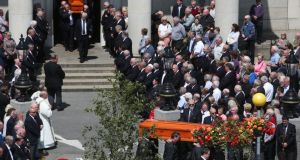 We live in a “broken, evil world” where the sanitised images of Isis have invaded our lives, the funeral of Larry and Martina Hayes was told this morning.

The couple were murdered along with 36 other people by Tunisian jihadist Seifeddine Rezgui on the last day of their holidays a week ago.

Speaking at their funeral mass in Athlone, Fr Liam Devine spoke of a community “shocked, stunned and devastated” by Isis’s murderous ideology which seemed so far away and sanitised on television screens. “The violence is now at our own door.”

They went everywhere together, loved gardening, took pride in their strawberries and flowers and kept a spotlessly clean house.

They loved their holidays and this was their third trip to Tunisia. “Summer holidays are a carefree time of relaxation. But this tragedy has merged massacre and mystery together, leaving us all in a bewildered state of shock and deep sadness,” Fr Devine told the packed congregation at St Peter and St Paul’s parish church in Athlone where he is parish priest.

Fr Devine contrasted the “sheer goodness and decency of people” in the wake of the tragic deaths with the “crazed brain washed fanatic” who murdered the couple as they lay on a beach in Sousse along with the other 36 who died.

“It is impossible to get inside the mind of someone who would carry out such an abominable act of violence. We cannot judge like that by our values and standards,” he said.

“Word is that he mingled with victims, joked with them and took their photos before producing the machine gun. How could anyone possibly believe that such an act could achieve any benefit anytime anywhere?

“The massacre of innocents is always an abominable crime. When done in the name of God, it is also blasphemy.”

Fr Devine described Islam as a religion that reverences the sacredness of life. The Tunisian people too were a victim of the massacre, he reminded the congregation.

Michael Hayes, Larry’s brother, spoke of a “happy, smiling couple” who had been married 32 years. They loved their new home in West Point.

They were inseparable. “If Martina climbed a wall, Lollie (Larry) would be right beside her.”

He finished off with a quote from The Beatles, “In my life I’ve loved you more”.

The chief mourner at the funeral was the couple’s only child Sinead. Representatives of Mr Hayes’ colleagues at Bus Éireann and CIE formed a guard of honour. Colleagues of Sinead, in the Order of Malta carried the coffin of Mrs Hayes from the church to the hearse.

1 The Sack of Balbriggan: The burning of a town that shocked the world 100 years ago
2 The FinCEN files: The billion dollar a month money trail
3 Brexit: Irish hauliers seek State help to bypass UK ‘land bridge’
4 Coronavirus: 396 more cases as public is urged to help protect ‘older and vulnerable’
5 Gardaí break up rave attended by 60 people at Dublin flat complex
Real news has value SUBSCRIBE