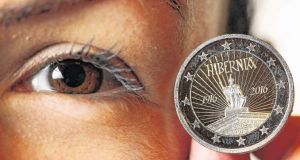 Central Bank staff member Maeve McLaughlin with the new commemorative €2 coin, which will be brought into circulation on Wednesday. Photograph: Jason Clarke/Central Bank 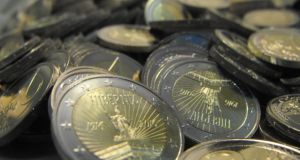 4.5 million coins were minted to mark the centenary of the 1916 Easter Rising. Photograph: Jason Clarke/Central Bank

The design of the State’s commemorative €2 coin has been unveiled to mark the centenary of the 1916 Easter Rising and the Proclamation of the Irish Republic.

The Central Bank will release 4.5 million of the coins into general circulation from Wednesday.

The design by Emmet Mullins beat submissions from 52 Irish and international designers to be chosen for the project.

It shows a representation of the statue of Hibernia (the historic personification of Ireland) on top of the GPO with the centenary dates.

The lettering of “Hibernia” is influenced by the Book of Kells.

It is the first time Ireland has issued its own commemorative coin into circulation.

Paul Molumby, director of currency and facilities management at the Central Bank, said the public could expect to see the coins in the coming weeks as they circulate.

“It’s a significant achievement for us to mint and issue our own circulating commemorative coin,” he said.

Collectable products including bookmarks and coin sets will also be for sale.