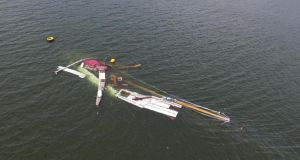 Debris following an explosion and fire on a boat on which two men were sailing close to Rinville near Oranmore on Saturday. Photograph: Gearóid Walsh

A lobster fisherman who became entangled in ropes after his boat sank off Donegal’s Arranmore island was saved by the quick actions of an Irish Coast Guard helicopter crew at the weekend.

The fisherman was working off Inishinny near Arranmore when his boat got into difficulty in a heavy swell on Saturday evening.

The alarm was raised by an emergency telephone call relayed to Malin Coast Guard shortly before 6pm.

The swell made an approach by boat difficult, and the helicopter was on the scene by 6.30pm. Although the man was wearing a life jacket, he had become entangled in ropes which could have proved fatal.

The helicopter winchman cut him free, and he was winched on to the helicopter which was was en route to Letterkenny general hospital by 6.50pm. He is said to be making a recovery from his ordeal.

Irish Coast Guard operations manager Gerard O’Flynn said that it was a very difficult rescue, but with a very speedy response time.

The Irish Coast Guard was also involved with emergency services in the rescue of two men from the water off Rinville, Oranmore, on Saturday when a yacht exploded and caught fire.

One of the men was hospitalised with burn injuries. He has since been discharged.

It is understood that the Marine Casualty Investigation Board may initiate an inquiry into the cause, although the vessel broke up and sank shortly afterwards.