CIT survey finds 91% of 2015 graduates in employment or study 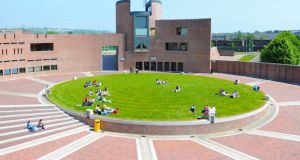 A survey conducted by CIT has shown a reduction in graduates travelling overseas for work. Photograph: CIT

Nine out of every 10 graduates from Cork Institute of Technology (CIT) last year is either in paid employment or further study with more than nine out of 10 of employed graduates working in Ireland, a CIT study has found.

According to CIT’s First Destinations Survey of its 2015 graduates, some 62 per cent of respondents are in paid employment while a further 29 per cent are engaged in further study, giving an overall figure of 91 per cent having secured a job or a place in further education.

The study also found that the proportion of graduates going overseas has reduced with some 94 per cent of employed graduates working in Ireland and almost three quarters - 74 per cent - of those working in Cork.

“There was a 5 per cent increase in 2015 versus 2014 graduates in paid employment - 62 per cent as opposed to 57 per cent - with 87 per cent of employed graduates working full time while those in part time employment decreased by 1 per cent and the percentage reporting as self-employed increased from 4 per cent to 5 per cent,” said CIT in a statement.

“The fraction reporting as seeking employment reduced from 7 per cent to 6 per cent with the remaining 3 per cent either travelling, volunteering, otherwise unavailable for work, or participating in an unpaid internship or work experience.”

According to the survey, the most prolific sector of employment is the bio-pharma, pharma-chem and medical device, and the manufacturing Sector, followed by the computer programming and consultancy, data processing sector.

The survey, now in its fourth year, also found that 83 per cent of employed graduates were in jobs directly relevant to their qualifications.

The survey was also welcomed by Treasa Morgan, Careers Officer at CIT who said the report provides concrete information that will inform strategy and decision making as well prospective students, career guidance counsellors, employment providers, and those interested in education.