The philanthropist has finished giving away billions, including €1.87bn in Ireland 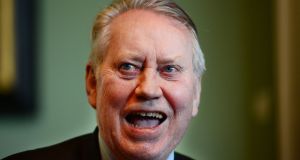 Chuck Feeney: The man who gave it all away. Photograph: Alan Betson

Some 80 years ago, a boy could be found on a New Jersey beach in summer distributing umbrellas and allowing himself to be “dunked” in a tub by contestants throwing balls at him. In winter the same youth would be selling Christmas cards door to door, then helping the mailman deliver them to the same doors, and on snowy days he might be digging out driveways with the help of a carefully chosen muscular pal. Anything to make a few cents for himself and his parents in the fairly impoverished Irish-American neighbourhood of Elmora.

He was canny. The local golf course paid caddies $1 to carry a bag for nine holes, and $1.75 for 18 holes, so he was always looking for two nine-hole players. Then, as a young man at Cornell University, he flogged home-made sandwiches to students and is still remembered there as the Sandwich Man, always ready with a wise-crack and bologna. He took on another really tough job then, as taster at a cake factory.

Chuck Feeney from the start was a genius at finding opportunities to make money. When he went to postwar Europe after graduating, he sold duty-free items to sailors on the US Mediterranean fleet, from miniature radios to cars, and soon became rich.

He and a partner Bob Miller overextended that business but recovered and got the concessions to establish duty-free shops in Hong Kong and Hawaii.

Duty free in the 1960s was a kiosk with a trestle table, but the pair identified a market about to explode. Tourists poured out of Japan with pent-up savings, and their stores multiplied and became glitzy emporiums. In Hawaii they needed armoured cars to take the day’s takings to the bank.

Their company, Duty Free Shoppers, employed hundreds of Japanese assistants, and Chuck sometimes served behind the counter. He taught himself Japanese. “Yokoso,” he would say, bowing to the customers. “Welcome.” They loved him.

By the 1980s he was a billionaire, with mansions in several countries, and not one but two tuxedos. But Feeney never felt at ease with the lifestyle of the wealthy. He read Carnegie: “To die rich is to die disgraced.” He mulled over his dilemma for some years; he loved making money, it was a constant challenge, but what to do with it?

Considerate by nature and influenced by the kindness of his parents, and by a childhood environment where you didn’t “blow your own horn” as he put it, he decided to give it away, quietly, without fuss.

On November 23rd, 1984, in a lawyer’s office in the Bahamas, he signed over everything – his DFS shareholding and the various businesses and properties he had acquired worldwide – to a foundation, known today as Atlantic Philanthropies.

While millions of Americans gave thanks that Thanksgiving weekend for the material things with which they were blessed, he celebrated divesting himself of his vast wealth with a fish and chips lunch.

He was 53, at the height of his intellectual powers. From that day on he applied his acumen for making money to the task of giving it away as head of the foundation.

For the next three decades Feeney circled the world seeking ways of doing good things with the money, at first without anyone knowing. He discarded the tuxedos, travelled economy, used buses and trains, and called to see potential beneficiaries dressed as a tourist on a budget.

Like the kid he was in Elmora, he was always on the make, only now it was on behalf of those who needed his vision and had exciting initiatives for the future. He cast an entrepreneurial eye on every project he considered funding. Shy and awkward at small talk, he was fluent and coherent when discussing blueprints or dissecting a prospectus. He read the small print, made suggestions, went all in, and then let people get on with it. He always encouraged them to think big, and thanked them for doing good things with the money.

The results are well chronicled: gleaming university campuses, hospitals with the latest technology, flourishing peace and human rights projects, all of which have changed countless lives for the better, especially in Ireland, the United States, Vietnam, Australia and South Africa.

He did it anonymously as long as he could, but his big-bet grants became too extensive to ignore. He was getting credit for other unnamed givers, and becoming synonymous with anonymous.

He found happiness seeing a young girl smiling for the first time after an operation for a cleft palate, or watching a surgeon restore someone’s sight, or discussing plans with scientists for a new hospital, or just chatting to kids in a library he had built, though they would not know that, as he never allowed his name on a building.

On Monday his giving-while-living odyssey came to an end in his former business office in San Francisco, close to the modest apartment where he and his wife, Helga, live on a pension. There, just after 10am, he signed papers closing his foundation for good. The $8 billion he accumulated is spent and accounted for ($1.87 billion on the island of Ireland). He is a happy man.

The ceremony was witnessed by a handful of people close to him, including Helga, and the (now former) head of his foundation, Chris Oechsli, and long-time faithful associates, Dave Smith and Gail Bianchi. Noted well-wishers came online. Bill Gates sent a video message to his “hero” in philanthropy.

They celebrated with cheese cake and Spumante, and Chuck and Helga then went back to the apartment for a grilled-cheese sandwich – a typically modest lunch for the one-time Sandwich Man, whose message for the rich is, “You will get a lot more satisfaction giving it away when you are alive than when you are dead – try it, you’ll like it.”

Conor O’Clery is the author of the biography of Chuck Feeney, The Billionaire Who Wasn’t