ARAN, the Animal Rights Action Network have held a vigil for ‘Terry’ the turkey outside a Dublin city centre butcher shop. The event was organised to remember the thousands of animals killed for the Irish market every Christmas. Video: Bryan O'Brien 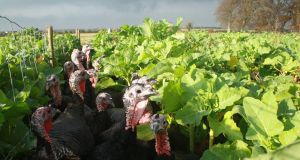 With just a few days to go until Christmas turkey sales are reaching their peak and independent butchers and producers say they are holding their own in the face of a festive fowl price war among the big retailers.

The president of the Irish Craft Butcher’s Association, Seamus Etherton, said butchers were facing huge challenges from large retail chains who appear to be using turkey as a loss-leading product this year.

Lidl is selling a 6kg fresh Irish turkey for €23.99, the same price as Tesco while all the other big retailers have comparable offerings.

Prices for frozen turkeys have fallen to little more than €10.

“The big supermarkets have decided to bring people through the doors with the promise of cut-price turkeys and they are selling them at prices that we can’t match,” Etherton said.

However, he said that despite the threat butchers were retaining customers because they had a unique offering and could prepare cuts that consumers want and offer advice unavailable in big supermarkets.

“We have built our business on service and quality like all butchers who will do okay this Christmas.

“We need to provide a very, very high level of service. We just have to adapt to current conditions to survive.”

He is selling 7kg turkeys for €55 and said turkey orders are up in his shop in Cabra.

He noted a more significant spike in goose sales, which, he estimated were up by as much as 25 per cent year on year.

“We are selling a lot more geese and a lot more ribs of beef,” he said. “Maybe it’s because we have more younger people coming in who are willing to break away from tradition.”

While a surge in goose sales may materialise in the days ahead, most consumers still favour the traditional turkey, that’s if a straw poll on Twitter conducted by The Irish Times is to be believed.

Some 68 per cent of more than 300 people who voted in just over an hour on Friday afternoon said they would want to see turkey on their plate this year.

Gerry McEvoy is a stonemason from Sallins, Co Kildare, who spends half his year rearing free-range bronze turkeys for the Christmas market.

All told he will sell 1,000 turkeys over the Christmas period.

“Things have been going very well this year,” he said. “We have our regular customers and have picked up some new business too.”

He said supermarket turkeys couldn’t hold a candle to his hardy, kale-fed fowl. “It is the way you rear them. That is how you get the taste. We will have ours on the farm for six months.

“Other turkeys are slaughtered after 11 or 12 weeks. They spend all day outside and have a layer of fat under the skin which keeps them moist and helps them cook.”

Compared to the supermarkets, his prices are steep. A 6kg turkey will cost €60 with each 500g costing an additional €3.

“You would definitely see the difference in taste. Bronze turkeys used to be traditional in Ireland until the 1960s when white turkeys took over. They’re the ones that have given the turkey a bad name.”

The heaviest turkey McEvoy reared this year weighed in at an impressive 37lb once slaughtered. “He was massive,” McEvoy said.

“Out of the 70,000 turkeys handled this year by the processing plant we use he was easily the biggest. They were taking pictures of him in the factory and everything.”

While large multinational supermarkets might offer cheaper prices in the run-up to Christmas, Mark Fielding of the Irish Small and Medium Enterprise Association highlighted the value in shopping locally.

He pointed out that “every €10 spent locally on Irish products generated €24 of benefit to the local community and 45 cent of every euro spent is reinvested locally in comparison to only 15 cent for the foreign multiples”.