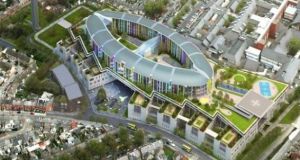 The developers of the planned new national children’s hospital have argued that the fire safety measures to be incorporated into the new facility exceed existing regulations and standards.

The National Paediatric Hospital Development Board (NPHDB) said the safety of children, parents, visitors, staff and the wider community was the primary concern for all those involved in the €1 billion project.

The Sunday Times reported that the board had lodged an appeal against a condition imposed by Dublin City Council for the granting of a fire certificate which involved a sprinkler system being put in place to cover all parts of the new facility.

It said a statutory process was under way in relation to a number of conditions relating to the fire safety certificate.

“The NPHDB is confident that the fire safety design measures we have proposed are both compliant with and indeed exceed current regulations and standards.”

Informed sources said that under the current plans a sprinkler system will cover the basement, canteens in the concourse and the three top floors which contain accommodation areas for children after they are admitted.

Sources said existing fire regulations did not require the sprinkler system to cover the inpatient wards on the top three floors or additional fire escapes as well as fire lifts and wet riser provision to enhance firefighting facilities which are also envisaged in the current design.

Sources said Dublin City Council had sought the sprinkler system to be put in place across the facility including the middle four floors which will contain operating theatres, critical care units, radiology and inpatient and outpatient departments.

The Sunday Times reported that compliance with the comprehensive sprinkler system requirement could add €2 million to the bill for the new national children’s hospital which will be the most expensive healthcare project in the history of the State.

However, sources said the board had not yet carried out an assessment of the cost of the measure.

The hospital was granted planning permission earlier this year and construction is under way.

Building work is due to be completed in early 2022.

Minister for Health Simon Harris told Newstalk on Sunday he wanted to see the new national children’s hospital completed within the budget allocated for the project.

The Minister also said he was optimistic that talks under way on the development of the new national maternity hospital on the site of the St Vincent’s University Hospital campus in south Dublin would remain in public ownership.