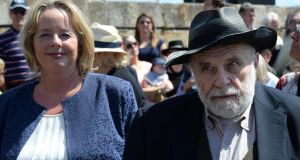 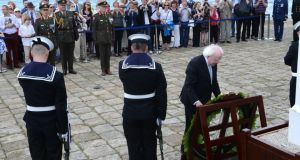 The centenary of the Howth gun-running incident was marked yesterday in an atmosphere that was as much celebration as commemoration.

Bright sunshine and a stiff sea breeze greeted the arrival of the Asgard replica as she hove into view around Howth’s East Pier.

Yesterday’s events marked 100 years and a day from the culmination of the daring 21-day sea voyage from the Belgian coast to Howth to arm the Irish Volunteers, which had been set up to defend Home Rule.

Thousands of people took every vantage point along the quay yesterday afternoon to watch as the replica – the original is in Collins Barracks – landed its cargo.

A group of re-enactors were on hand to take the boxes marked, as they were 100 years ago, with the logo Mauser 1871 - Infantrie Gewher (infantry rifle), but without its potential deadly cargo save for a single rifle and cartridge.

Addressing the crowds, President Michael D Higgins praised the crew of the Asgard, only two of whom were Irish-born, for their courage in landing the arms.

Their actions were essentially “defensive rather than offensive”, he said “against those who would oppose Home Rule by force of arms”.

cution It was a proud day for the Childers family, led by MEP Nessa Childers. Her grandfather Erskine and grandmother Molly, one British and the other American, risked their liberty and reputation, to land the guns at Howth on July 26th, 1914.

Erskine Childers went from becoming a dedicated son of Empire to a fierce opponent of the Treaty and was executed by the Free State Government in 1923, an episode President Higgins described as a tragedy.

The commemoration, like the gun-running itself, was an international affair, with relatives coming from Britain and American.

Nessa Childers said the commemorations had an emotional impact on her and her family.

“I’ve always been very proud to be a granddaughter of Erskine and Molly Childers. They’ve always had an influence on me although I never knew them.”

A day that had begun 100 years ago in defiance of the British authorities ended in tragedy when soldiers from the King’s Own Scottish Borderers, who were sent to intercept the weapons, opened fire on a hostile crowd at Bachelors Walk on Dublin’s quays on their way back to barracks.

Those killed were Mary Duffy, a 56-year-old widow whose son was serving in the Royal Dublin Fusiliers; Patrick Quinn, a coal porter and father of six; James Brennan a 17-year-old messenger boy; and Sylvester Pidgeon who lost his life later, in September , as a result of his injuries.

President Higgins said that their deaths were part of the “tremendous human suffering of the victims of the conflicts of that era”.