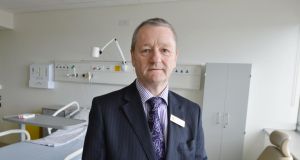 The chief executive of the Central Remedial Clinic - who has resigned in the wake of controversy over governance issues and top-up funds at the organisation - has broken his silence over the scandal.

In a statement issued this evening, Mr Conlon said he had been out of the country on personal leave when details emerged over the use of charitable funds for top-up payments.

He confirmed he had tendered his reignation, adding: “I believe that it is in the best interests of the Central Remedial Clinic’s clients and staff that the new chief executive should not have any association with legacy matters at the CRC.”

The clinic has been mired in controversy since it emerged that charitable funds were used to top-up the salaries of senior executives.

The Irish Times also reported last week that the HSE had expressed alarm in recent months over the “highly irregular” manner in which Mr Conlon was appointed.

In his statement, Mr Conlon said he had been offered the position of chief executive last July following a selection process conducted by the clinic’s board, with assistance from recruitment consultants Amrop Strategis.

He also said his salary as chief executive was within the guidelines provided by the HSE.

Mr Conlon said he his primary focus while at the clinic was preparing the organisation for the anticipated bringing into force of the Charities Act legislation.

“I believe that there should be full transparency within the charitable sector with regard to how all funds raised, both private and public, are spent and that all executive remuneration should be within HSE guidelines,” he said.

“I hope that the CRC will now take the opportunity to start afresh with a clean slate so the excellent service provided by its dedicated staff can continue to be made available to its clients who rely on it and who should not be the innocent victims of any fallout.”

Mr Conlon did not make any reference as to whether he is willing to appear before the Dáil’s Public Accounts Committee later this week.

Neither did he address in any detail the concerns raised by the HSE over the manner in which he was appointed.

Confidential internal documents seen by The Irish Times show that at one point last summer the HSE said it was considering suspending nearly €250,000 in funding as part of the row.

In a statement earlier today which did not make any reference to the current controversy, clinic’s board said it accepted Mr Conlon’s resignation as chief executive with regret.

“The board thank Brian Conlon for his commitment to and support of the CRC. His many years of servicves on the board are greatly appreciated. We wish him continued success in the future, ” it said.

Jim Nugent, who is chairman of the clinic’s board, is due take on the role of chief executive on an interim basis.

In addition, it said Joan Hurley will fulfil the position as operations director in the day-to-day management of the clinic and will coordinate the senior management team.

“The board will work closely with the senior management team and staff to ensure a positive future for the CRC, its service users and staff,” it said.

The board itself has faced calls from a number of politicians to resign for its role in the controversy over top-up funds. To date, the board has declined to comment.

Much of the controversy surrounding the clinic has focused on Mr Conlon’s predessor, Paul Kiely, who received remuneration of €242,865, according to an internal HSE audit.

These unauthorised allowances were part-funded with charitable funds raised at a time when the organisation was accused of cutting services for adults and children with disabilities. Five senior staff at the clinic are still in receipt of top-up payments.