Charles and Camilla begin visit with trip to Heaney’s heartland

Britain's Prince Charles and his wife Camilla have begun their four-day tour of Ireland with a visit to the Seamus Heaney HomePlace in Derry. Video: Reuters 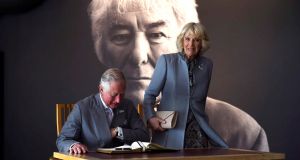 Prince Charles and his wife Camilla at the Seamus Heaney HomePlace in Bellaghy, Co Derry, on Tuesday. Photograph: Clodagh Kilcoyne/Reuters

Prince Charles and his wife Camilla began a four-day visit to the island of Ireland by travelling to the spiritual heartland of the late Seamus Heaney in Bellaghy, Co Derry, on Tuesday.

The British royal couple are spending Tuesday and Wednesday on engagements in Northern Ireland before travelling to Dublin on Wednesday afternoon where they will be greeted by President Michael D Higgins and his wife Sabina at Áras an Uachtaráin.

The royal visitors will go to Glasnevin Cemetery in Dublin to commemorate those who lost their lives in the 1916 Easter Rising and the first World War.

In Bellaghy on Tuesday, Prince Charles made reference to Northern Ireland’s troubled past and to how Heaney was a poet who saw “difference as opportunities for understanding and exchange” and how in his home place he learned “what it is to belong and with grace and generosity extended that belonging to the world”.

This will be the couple’s third visit to the Republic in the past three years. In May 2015, they travelled to Mullaghmore in Co Sligo where the prince’s great-uncle, Lord Louis Mountbatten, and three others were killed in an IRA bombing in 1979.

Buckingham Palace said that as on the two previous occasions “this visit will showcase the strength and vitality of the connections between the United Kingdom and Ireland, and the friendship and partnership that has defined our relationship over recent years”.

“The prince and duchess’s programme will allow them to honour those men and women whose sacrifice in times of conflict shaped our two countries’ shared history; and to celebrate all that we do together to cement peace and secure a prosperous future,” the statement added.

Other highlights of the visit to the Republic will include an engagement at Kilkenny Castle, where they will hear traditional music and watch a hurling match.

Prince Charles will tour the United Nations Training School Ireland at the Curragh Camp while the duchess will visit the Irish National Stud in Kildare.

In Dublin, Prince Charles also will meet Taoiseach Enda Kenny. They will conclude their visit on Friday by attending a reception at the British ambassador’s residence.

The couple began their visit at lunchtime at the Heaney HomePlace arts and literary centre in Bellaghy, and also met the late poet’s widow Marie and children Christopher, Michael and Catherine.

During the visit, students from Rainey post-primary school in Magherafelt, Co Derry, performed an excerpt from Heaney’s The Burial At Thebes in the centre’s 189-seater Helicon performance space.

Prince Charles is an admirer of Heaney’s work and last October, for British national poetry day, recorded a reading of his poem The Shipping Forecast. Heaney also gave classes at two of the prince’s literary summer schools.

Heaney met the prince a number of times, describing him as “affable and smart in company”.

Prince Charles referred to how at Hillsborough Castle on Tuesday night Belfast composer Neil Martin is performing the world premiere of Song After Rain, which was commissioned by the prince and celebrates the three cultures on the island, Irish, Ulster Scots and English.

“I hope in some way, therefore, that this work will come to show how our varied histories, voices and traditions can come to create all the greater harmony when they come together,” the prince said. “After all, it is differences that make harmony possible even as it is the barriers that have been overcome that make friendship all the stronger.”

Prince Charles and Camilla also visited the Altnagelvin Hospital cancer centre in Derry, which provides treatment for patients from both sides of the Border.