Company owned by US fund pays no tax on €2.65 million a year in rent, says Sinn Féin 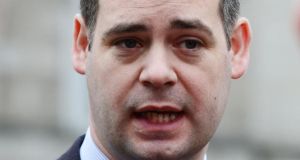 The Central Bank is paying millions in rent to a vulture fund that pays no tax in Ireland, Sinn Féin finance spokesperson Pearse Doherty has alleged.

Mr Doherty revealed that Cedar Real Estate Investments Plc is paid €2.65 million a year rent in relation to office space leased to the Central Bank and pays no tax on this income.

He said the anomaly arose as the company is structured as an Alternative Investment Fund and would be classified as an investment undertaking according to Irish tax legislation.

Mr Doherty pointed out that the Central Bank regulates Cedar.

He accused successive governments of having designed the tax law is such a way that it allows for foreign-owned property funds to have no tax liability on the millions of euro in rental income they receive in Ireland each year.

Mr Doherty said Cedar is ultimately owned by Starwood Property Trust Inc, an American vulture fund, and as such its owners are not resident in the State.

This structure and ownership model allow for it, through Irish tax legislation, to be exempt from tax in the State, he said.

He added: “At a time when our ordinary families and squeezed with a cost-of-living crisis and public services are under-resourced, these vulture funds are paying little or no tax, and now we learn the State is paying millions to at least one of them.

“Even more infuriating is that it is the very body that is tasked with regulating these funds, the Central Bank, that is paying them. The State’s policy on vulture funds is going from scandal to farce.

“Minister [for Finance Michael] Noonan needs to act urgently to amend the tax designation of non-resident property funds in the interests of fairness and the public purse.”

There was no response from the Central Bank at the time of going to press.