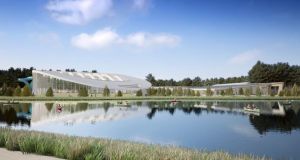 Artist’s impression of the planned resort at Newcastle Wood, Co Longford: The plan envisages building 500 chalets on the 375-acre site in the midlands. Photograph: PA

UK leisure giant Center Parcs has revealed artist impressions of what its proposed adventure village in Co Longford will look like.

Center Parcs Longford Forest, situated in Newcastle Wood outside Ballymahon, will be the single biggest tourism development in the history of the State, costing more than €100 million.

A detailed masterplan, scale models of the lodges and the centre buildings – including the centrepiece, a subtropical swimming paradise – have been shared with residents in Ballymahon.

The plan envisages building 500 chalets on the 375-acre site which will be purchased from Coillte if planning permission is issued.

Ireland’s first Center Parcs resort will be very similar to the company’s five existing adventure villages in England, with a central area of shops and restaurants around a swimming pool, although the Longford development will also have treehouses.

Center Parcs chief executive Martin Dalby and senior members of his team are in Ballymahon to answer questions from the public about the project. Mr Dalby said the purpose of the visit was to “continue our dialogue with the community, share our plans and listen to people’s views”.

Damien Hannigan, director of the Wild Deer Association of Ireland, said that the existing herd of between 40 and 50 deer in the forest may move out of their habitat in the wood while the development is being built.

He said it was simply a “matter of fact” that this would happen and the deer may migrate to adjacent woodland.

Mr Hannigan said the association will not object to the development and he believed that it would bring a lot of benefits to local people.