‘The wheelchair is gathering dust – his whole health has completely changed’ 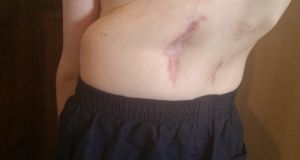 Before: Tommy Long, whose congenital scoliosis meant he was unable to play like other children 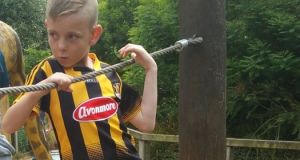 After: Tommy Long, who finally got a date for the procedure and spent Easter week in Our Lady’s Hospital Crumlin. “He did a soccer camp in August, he’s doing swimming, he’s back in school,” according to his mother, Michelle

Earlier this year, Tommy Long was awaiting his seventh operation to correct congenital scoliosis and in a lot of pain and discomfort, unable to play like other children and using a wheelchair whenever he had to travel any further than the shortest of distances.

A victim of the long waiting times for scoliosis surgery, Tommy (7) finally got a date for the procedure and spent Easter week in Our Lady’s Hospital Crumlin.

But it has been worth it.

“He did a soccer camp in August, he’s doing swimming, he’s back in school,” Tommy’s mother, Michelle, said. “The wheelchair is gathering dust. His whole health has completely changed – it’s like night and day.”

The operation, when it did happen, took 11 hours and was performed by surgeons Jacques Noel and Pat Kiely.

And while the Long family – from Ballycallan in Co Kilkenny – are in a much happier place today, they say it has been frustrating that they had to wait so long.

The operation was to insert a new rod to straighten Tommy’s spine but, because of the wait of more than 30 weeks since the previous procedure, the doctors also had to remove two vertebrae to effectively free up space in his back.

“I don’t have words for the day of the surgery, the risks of it going wrong, of paralysis and so on. The surgeons are there and they can do this. Crumlin have a state-of-the-art theatre. They have more theatre days now but there’s such a huge backlog.”

Minister for Health Simon Harris promised earlier this year that the target of a four-month wait for treatment of scoliosis would be met by the end of 2017. However, the number of children waiting for surgery has increased.

In March, there were 124 children waiting more than four months for spinal fusion or surgery at Our Lady’s Hospital Crumlin and Temple Street Children’s University Hospital, but by last month this had increased to 145, figures from the Health Service Executive show.

Crumlin has committed to doing 44 extra operations on children with scoliosis by the end of this year, while 20 more patients will be travelling to the UK and 50 more elsewhere in the EU. Their travel will be funded by the HSE.

A new operating theatre opened in Crumlin in April and is in use three days a week. A new orthopaedic consultant post was filled this week, three months later than originally envisaged.

“There’s movement there but they’re spending money on going to Europe and there are still cancellations here. Emergencies crop up so there are cancellations sometimes and Crumlin aren’t allowed to operate at capacity, yet they [the Government] will spend millions on outsourcing,” said Ms Long.

“We hope that after 2018 the backlog will be much smaller.”

Meanwhile, she is hopeful that Tommy will get a couple of years before he has to have his spinal rod replaced.

“Something could go wrong but when something goes wrong, what kind of access to care are we going to have?” asked his mother.

1 Gardaí cannot prosecute people who breach midlands movement restrictions
2 New Zealand marks 100 days without a case of coronavirus
3 Midlands lockdown Q&A: Firstly, is it a lockdown or not?
4 Covid-19: One more death and 174 further cases confirmed in State
5 ‘It is soul destroying’: Kildare hotelier on calling guests to cancel
Real news has value SUBSCRIBE