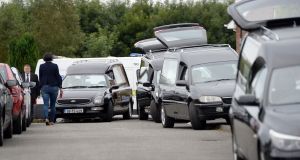 The scene in Ballyjamesduff where the bodies of five members of a family were discovered in a house on Monday. Photograph: Eric Luke / The Irish Times 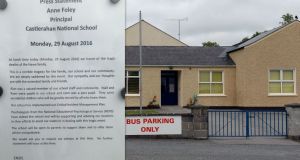 The blinds of Castlerahan primary school were pulled down and a sense of grief lay over the Ballyjamesduff area where five people died in a murder suicide.

On Monday morning, gardaí had been called to the house where the bodies of Alan and Clodagh Hawe and their children Niall (11), Ryan (6) and Liam (13) were found.

Assistant Garda Commissioner John O’Driscoll described the scene as “a grim discovery”. The alarm was raised at about 10.45am when someone, believed to be a relative, called to the house and became suspicious.

“We can confirm that we are not looking for anybody else. We believe all the answers are within that house so therefore the most likely scenario that one person in that house may have caused the death of others,” Mr O’Driscoll said.

Several cars were parked outside the school on Tuesday morning but there were none of the signs of a normal school day as the community tried to come to terms with the tragedy.

Local parish priest Fr Feilim Kelly went into the school this morning and the Department of Education sent in psychologists from the National Educational Psychological Service (NEPS) to help the pupils and teachers in dealing with the tragic event.

The principal of Castlerahan National School, Anne Foley, issued a statement via the Irish National Teachers’ Organisation (INTO).

“Alan was a valued member of our school staff and community. Niall and Ryan were pupils in our school and Liam was a past pupil. They were wonderful children who will be greatly missed by all who knew them. The school will be open to parents to support them and to offer them advice and guidance.”

In the neighbouring church, the candelabra was full of lit candles. An elderly woman who did not wish to be named lit a candle, blessed herself and said she was lighting candles in memory of the family.

“Castlerahan GAA club were deeply saddened to learn this afternoon of the tragic deaths of the Hawe family.

“The family were well-known and widely-respected within our club and community and the news has come as a dreadful shock to everyone involved in the club.”

It said: “On behalf of the players, officials and members, we pass on our deepest sympathies to the wider bereaved families and all their friends and colleagues.

“The entire GAA family in Castlerahan are shocked and grief-stricken at this terrible event.”