Castlebar restaurant told to ‘use own judgment’ on gas safety

Investigation will examine manner in which safety concerns were communicated 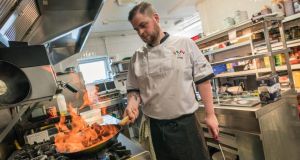 Mayo businessman Gary Middleton was very disappointed with the handling of the alert over odourless gas this week.

Mr Middleton, who is part-owner of the Yew Tree bar on Castlebar’s Linenhall Street, says he only learned about the situation when he heard it on RTÉ news on Friday morning.

The affected areas were Galway city, and Tuam and Headford in Co Galway; and Ballinrobe, Claremorris, Castlebar, Westport, Crossmolina and Ballina in Co Mayo. Natural gas is not supplied to Belmullet, the nearest town to the Corrib gas refinery.

“We had cooked our evening meals on gas throughout Thursday and up to 9pm, without realising that the supply should have been switched off,” Mr Middleton said.

He phoned Gas Networks Ireland on Friday, and says he was advised that he could use his own judgment on switching off the supply at the meter. “Basically it was telling me that the safety of my staff and customers was my own concern,” he said.

His premises has electricity as well as mains gas, but cooks most of its meals – 60-100 daily – on gas.

Gas Networks Ireland said in response that it had sent out “thousands” of text alerts to customers who had registered their mobile numbers on its system, and had issued information through social and mainstream media.

“The majority of our customers – at least 70 per cent – were notified in this way, and we also worked with 60 vulnerable customers, including nursing homes,” a spokesman said.

It said it could not compel customers to switch off the supply, but endeavoured to give full information on the risk associated with odourless gas.

Two investigations have been initiated by State agencies – the Environmental Protection Agency, and the Commission for Energy Regulation – and it is understood that communication of the alert is one avenue being pursued in the EPA inquiry.