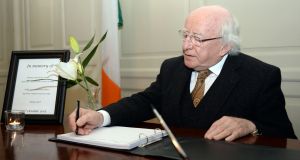 President Michael D Higgins signs a Book of Condolence at The Mansion House, in Dublin for those who died in the Carrickmines fire. Photograph: Eric Luke/The Irish Times 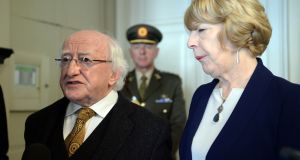 President Michael D Higgins and his wife Sabina visit The Mansion House in Dublin to sign a Book of Condolence for the victims of the Carrickmines fire. Photograph: Eric Luke/The Irish Times 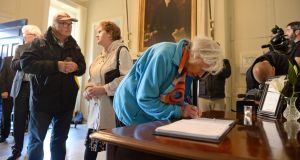 Members of the pubic sign the Book of Condolence at The Mansion House in Dublin for those who lost their lives in the Carrickmines fire. Photograph: Eric Luke/The Irish Times 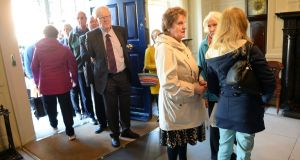 People queue to sign the Book of Condolences at The Mansion House in Dublin. Photograph: Eric Luke/The Irish Times

President Michael D Higgins has signed a book of condolence which was opened at the Mansion House, Dublin on Monday for the victims of the Carrickmines fire tragedy.

Mr Higgins said he and wife Sabina wanted to express their sympathies and those of the nation to the families of those bereaved by the deaths of 10 people at temporary halting site in the early hours of Saturday morning.

The President said he had also contacted two others injured in the fire who are being treated in Crumlin Hospital and had wished them a full recovery.

“I think the whole country is deeply moved by the whole tragedy and the grief that must have fallen on that family,” he said.

“I know there are many other books being opened elsewhere and the queue outside makes its own expression of the anxiety of the public to express their sympathies with the families.

“Our thoughts must be with the extended members of the family who are in Crumlin Hospital.”

Several dozen members of the public queued up to sign the book when it was opened at 11am.

The book of condolence will be open from 11am to 4pm on Monday October 12th and Tuesday, October 13th at the Mansion House on Dawson Street.

A book of condolence has also been opened at County Hall in Dun Laoghaire and at Dundrum Office Park in Dundrum. It will be opened from Monday to Thursday from 9am to 5pm and on Friday from 9am to 4.30pm.

A privately organised candlelit vigil will be held in Eyre Square, Galway between 7.30pm and 9pm on Wednesday in memory of those who died in the Carrickmines tragedy.