Canon Turner passed on love of soccer to his children 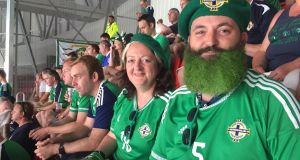 Kate Turner and her brother Justin, who was declared official fan of the match during Northern Ireland’s 2-0 victory over Ukraine. Photograph: Gerry Moriarty.

Amid the celebrations by Northern Ireland fans after Niall McGinn scored the second goal to ensure victory over Ukraine in the Olympique Lyonnais stadium on Thursday, Kate and Justin Turner also took a little personal time to remember their father.

Canon Edgar Turner (96) had his tickets bought and his flights booked to travel with them to France for the Euros, having already traversed much of Europe over many decades supporting Northern Ireland.

It wasn’t to be. Turner, a retired Church of Ireland minister, had a couple of falls early this year, triggering a decline, and he died seven weeks ago.

He bequeathed his love of soccer to his two children and also a concept of the game as unifying and all-embracing, and a way to experience new countries and cultures. This afternoon Kate and Justin, and his Dublin wife Bláithín, are in Bordeaux cheering on the Republic against Belgium.

Canon Turner’s last away game was a friendly in Latvia in November, while in September he travelled to the Faroe Islands for one of the North’s qualifying matches.

Kate, who works with the cross-community group that tries to grapple with the past, Healing Through Remembering, lists off some of the away games they attended as a family: “The Faroes, Liechtenstein, Hungary, Austria, Spain, San Marino, Italy . . . ”

They are also Derry City fans, another legacy of their father, a Derry native who supported the team from its foundation in 1928.

Canon Turner, whose parish was in High Street in central Belfast, engaged in anti-sectarian work during the Troubles, another value he passed on to his children.

Kate and Justin were and are heavily involved in Northern Ireland’s long-running “Football for All” project, which was driven by the likes of Michael Boyd of the Irish Football Association and Jim Rainey and Gary McAllister of the Northern Ireland Supporters’ Club.

Kate acknowledges that Windsor Park could be a sectarian venue back in the 1980s and 1990s, but also points out that back then there were thousands of Northern Ireland supporters – including her father – who abhorred such attitudes and just wanted to enjoy the game.

“It’s painting everybody with the same brush that upsets me,” she says.

“I have to say on both sides are football people. For them it’s about supporting a team,” says Justin. “But you get people who try to put more than football on to it. There is always that minority on both sides who end up getting too much airtime; these are the people supporters aren’t happy with.”

The siblings are enjoying Northern Ireland’s first qualification for the Euros, although the absence of their father makes the experience rather bittersweet.

Thursday’s victory against Ukraine was one of their great soccer experiences, enhanced by the green-bearded Justin being officially declared fan of the match and getting his picture put up on the huge stadium screens.

Germany may be world champions but Justin and Kate say they will fear Northern Ireland. Canon Turner took Kate to her first Northern Ireland game at Windsor Park in 1982. He had been bringing Justin for some years before that but she kicked up such a stink he gave in and decided that following Northern Ireland could be a girl’s pursuit too.

She hopes it’s a positive portent for Tuesday that, in that game, Northern Ireland defeated West Germany 1-0.