Candles flicker for woman and children who died in Clondalkin fire 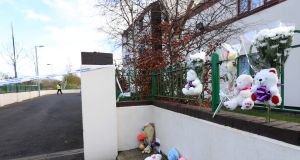 Flowers and teddy bears placed at the scene of the fire in Cluainin Cronan, Clondalkin in which Annemarie O’Brien and three children died. Picture Colin Keegan, Collins Dublin.

Candles flickered in the breeze on Wednesday night as tributes from local people continued to pile up outside the building in Clondalkin, west Dublin, where three children and a pregnant woman died in a fire earlier that day.

Throughout the course of the day a steady trickle of residents from the surrounding houses and estates filed past the police cordon at the entrance of the building to pay their respects.

A neighbour of Annmarie O’Brien (27), who died in the fire, said she found it difficult to comprehend what had happened.

“I left work at 8am and one of my neighbours said there was a gangland shooting. That’s what I thought it was, and then I heard the news. Oh my God,” she said.

“I know those children because I come up through the lane [beside the building]. I give them sweets in the morning when I’m coming in and out, they know my name and everything. They always come up to the gate to see me and say hello.”

A makeshift shrine was created at the scene of the fire during the day. It comprised several teddy bears and at least a dozen bouquets of flowers carrying messages of sorrow for the people who died.

Another said: “Deepest sympathy to you all in such sad circumstances,” while a third simply stated: “Rest in peace little angels and mammy.”

When word came through in the early evening of a fourth fatality, a four-year-old boy who was being treated for smoke inhalation at Our Lady’s Hospital Crumlin, visitors outside the building embraced and shed tears at the rising death toll.