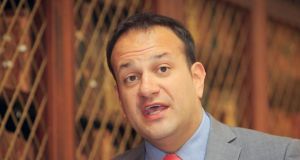 The Minister for Health Leo Varadkar has been urged to hold an investigation into why the HSE allowed over € 2 million raised by a charity to be invested in a new purpose built isolation unit for cystic fibrosis (CF) sufferers at Cork University Hospital when it didn’t have the staff to run the centre.

The Minister for Health Leo Varadkar has been urged to hold an investigation into why the HSE allowed over € 2 million raised by a charity to be invested in a new purpose built isolation unit for cystic fibrosis (CF) sufferers at Cork University Hospital when it didn’t have the staff to run the centre.

Joe Browne, Chairman of Build4Life has demanded an inquiry into why management at Cork University Hospital allowed over €2.3 million of the charity’s funds to be invested in new isolated cystic fibrosis inpatient rooms knowing they would not have the staff to run it.

The project team for the new unit was put in place in 2011 when all objectives and timelines were agreed and at no point were staffing levels a problem and it was agreed the new CF inpatients room (Ward 5B) would open and be serviced by the existing CUH staff in March 2015, said Mr Browne

“When the plans for this new ward were on the table, the hospital advised us that the patients and staff would be relocated to the new ward as soon as it opened in March 2015. It was made clear that the existing staff in CUH would service the ward and that no new staff would be needed.

“The first mention of staffing problems was communicated to me in an email on 10th June 2015, outlining that new staff would need to be recruited for the hospital before the new CF unit could be opened and that the hospital could not give me a timeline as to when this would happen.

“I am raising the question as to how can money raised by a charity like Build4Life can be taken and used to build a state-of-the-art unit knowing that the hospital wouldn’t have the capability to open it.

“It now lies idle while patients with CF, who so desperately need the new isolation rooms, are without and their families and friends who fundraised so tirelessly are frustrated, angry and disbelieving of such an illogical situation.”

Mr Browne explained that Build4Life, a charity that raises money for improved facilities for patients with cystic fibrosis at CUH, was originally set up in 2007 with the specific goal of raising the €2,300,000 needed to build and open the much-needed isolation rooms.

He said the development of isolated inpatient and outpatient facilities is clinically proven to prevent cross infection and allow CF patients to enter the hospital environment without fear of becoming sicker.

These facilities will allow people with Cystic Fibrosis to live longer and enjoy healthier lives” said Mr Browne, adding that he and Build4Life are looking for answers from CUH and he said he wants someone to be held accountable.

“These plans were in place for over four years and someone needs to be held accountable for the decisions that were made. The hospital will not tell us how many new staff are required overall to open the new ward and will not give us a date for opening.

“It’s a disgrace and I am calling on the Minister for Health Leo Varadkar to launch an investigation into how this situation involving such a substantial investment and now an empty and idle multi-million medical unit, was allowed to happen.”

According to the HSE, CUH management recognises the need to open the unit and every effort is being made to recruit the staff to do so as quickly as possible and the hospital is actively recruiting nurses and interviews are being held in CUH on a weekly basis.

Recruitment campaigns are also underway to recruit nursing candidates internationally as there is a shortage of nursing staff nationally, said the HSE, adding that once additional nursing staff are recruited, the new unit will open immediately.

“In the interim, the care of patients with cystic fibrosis continues to be managed by the medical teams attached to the cystic fibrosis speciality. Staff with specialist training in CF currently provide care to patients with CF and will continue to do so when the new unit is open,” it said.