Some 100,000 passengers to be affected as strike at bus company enters fifth day 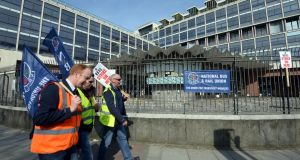 The strike at Bus Éireann entered its fifth day on Tuesday with further possible industrial unrest on the way at Iarnród Éireann and Dublin Bus.

Siptu said on Monday it would ballot members working at the bus and rail companies for action in support of the striking Bus Éireann staff.

The move by the union would see members balloted from next week but, if approved, is unlikely to take effect until the end of next month.

As the Bus Éireann strike began on Friday, affecting about 100,000 passengers who use the company daily, rail services were disrupted in a number of locations as Iarnród Éireann workers did not pass pickets at depots shared with bus workers.

No such disruption to rail services is expected on Tuesday, with the latest service update from the rail company indicating it expects “full services will continue to operate in the coming days”.

The company tweeted on Tuesday morning: “All trains operating on all routes. No disruption arising from (Bus Éireann) dispute anticipated.”

About 2,600 staff in Bus Éireann are on strike over plans by management at the State-owned company to introduce cost-saving efficiency measures and work-practice changes without agreement.

On Monday, Siptu organiser Willie Noone said members in Dublin Bus and Iarnród Éireann “believe that they are next in the firing line if management in Bus Éireann is allowed to force through cuts to wages and changes to conditions of employment of their staff ”.

The ballot at those companies would take a couple of weeks to complete, and the union would then have to give a further week’s notice before any action could take place.

There are fears that workers in Dublin Bus and Iarnród Éireann – which along with Bus Éireann form the CIÉ transport group – may stop working for a period on Wednesday to participate in a protest at Leinster House.

Bus Éireann yesterday said its board has been unable to sign off on accounts for last year or to agree a budget for this year due to a failure to agree work-practice reforms and new efficiency measures with staff.

The board said it was gravely concerned that losses continued to accelerate, and that the company’s financial troubles were being exacerbated by the strike.

A survival plan presented by management to the board on Monday envisaged about 300 job losses under a voluntary redundancy scheme. However, the company said without an agreement on work-practice reforms to generate savings it would not be possible to fund such a voluntary severance scheme.

“Faced with that scenario, the board of directors will have no option but to consider other measures to prevent the business becoming insolvent.”

Meanwhile, the National Transport Authority (NTA) has said private bus operators will be able to meet increased demand during the Bus Éireann strike under existing State licences – even if it goes on indefinitely.

Current legislation enables private operators to increase the number of services they run daily on their licensed routes, but they cannot start new routes that they are not licensed for.

NTA spokesman Dermot O’Gara said the authority believed private operators’ capacity to expand existing services will be “sufficient” even if the Bus Éireann strike runs for a significant period.

However, the State transport regulator said it will not give permission to run new services on routes that are served only by Bus Éireann.