Brown Thomas ordered to take hoverboards off its shelves 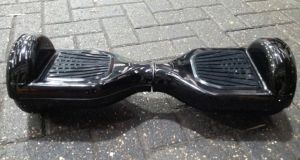 Brown Thomas is among a handful of retailers in the Republic who have been ordered to remove non-compliant hoverboards from its shelves after it was unable to prove items had the required safety certification.

Alongside Brown Thomas, the Gadget Box and a shop trading under the name Bikes or Bicycles were also ordered to stop selling hoverboards by the Competition and Consumer Protection Commission (CCPC).

Other shops are also likely to face similar direction in the days ahead, the commission warned.

Yesterday Argos confirmed it had removed its line of hoverboards, called the Nevaboard, from sale while it carried out extra testing. “As a responsible retailer, Argos takes customer safety extremely seriously. We have stringent processes in place to ensure that all products we sell conform to safety standards,” it said in a statement.

Since it suspended the importation of 1,400 hoverboards in late November, the Commission has undertaken extensive market surveillance activity and initiated a number of investigations into retailers’ and importers’ compliance with safety standards.

Its investigation has uncovered evidence of hoverboards with non-compliant and potentially unsafe plugs and fuses as well as significant issues with the cables, chargers and the battery packs.

It is also preparing to take enforcement action against other traders.

Manufacturers, or their authorised representatives, retailers and importers, who cannot provide evidence that essential safety standards have been met, should remove the products from sale immediately, the CCPC said.

“The Commission has undertaken extensive market surveillance and we are aware that there are a number retailers and importers who are selling products which are non-compliant,” its chairwoman Isolde Goggin said. “The action today was taken to address this non-compliance. Further action is planned.”

She said the law was very clear that products placed on the market must conform to relevant safety standards. “The onus is on the seller of the products to provide the required safety certification. If this cannot be provided, the products should not be on the market. Anyone who sells, or attempts to sell products which are not compliant can expect to hear from the Commission, if they have not already done so.”

She also cautioned consumers to be on their guard. “To date, the Commission has inspected a number of hoverboards and none of the retailers concerned were able to provide the required proof that they comply with the essential safety requirements,” she said.

“Our inspections have found significant issues with plugs, chargers, cabling and battery packs, all of which do not comply with essential safety standards. Should the AC adapter/charger or the battery pack overheat, they could cause a fire. We have very serious concerns about these products,” she added.

Hoverboards are known to many as levitating skateboard without wheels from the Back to the Future films. However the hoverboards on sale stay firmly on the ground and are self-balancing boards which have become among the must-have gifts this Christmas.