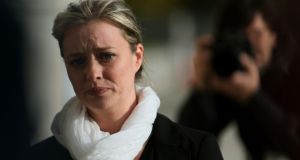 Mairia Cahill and two other victims of alleged sexual abuse by an IRA member have held a “constructive” and “positive” meeting with Sir Keir Starmer, QC. Photograph: Brian Lawless/PA Wire

Mairia Cahill and two other victims of alleged sexual abuse by an IRA member have held a “constructive” and “positive” meeting with Sir Keir Starmer, QC, who is conducting an independent review into how the North’s Public Prosecution Service dealt with their cases.

The North’s Director of Public Prosecutions Barra McGrory, QC, who runs the PPS called in Sir Keir to conduct the review following Ms Cahill’s allegations that she was raped by an IRA man when she was 16 and that the IRA subsequently acted to cover up the abuse.

Sir Keir said these were preliminary meetings and more were planned. He hoped to publish his report in the early spring.

“It’s important at the beginning of a review like this that whoever is conducting the review speaks to those centrally concerned so that they can have confidence in the process, and I am grateful to them for giving me their time today, and discussing their issues of concern,” said Sir Keir after the meetings.

“Sometimes in reviews like these the complainants don’t want to participate and that makes it more difficult. The fact that they came forward and met with me and had constructive discussion is a very helpful start,” added the former British DPP.

“The Director of Public Prosecutions has assured me full access to all materials and PPS staff for the purposes of this review. I will conduct an independent and robust review of all relevant material and will publish my findings,” he said.

“The DPP has asked me to look at the issues lock, stock and barrel. So, that’s the approach I have taken,” he added.

Ms Cahill also expressed some satisfaction with the meeting. “I am adopting a wait and see approach but it was a positive meeting and I do think he listened in a genuine manner and I will be meeting him again. It is the start to a very in-depth approach and I think he has his work cut out for him,” she said.

Cahill and the two women

Ms Cahill and two other women alleged that they were separately sexually abused by IRA member Martin Morris when they were in their teens.

The two women, who have anonymity, pulled out of the case against Mr Morris when it was being processed to trial.

Ms Cahill, in addition to the rape charge against Mr Morris, alleged four other IRA members had “interrogated” her about her claims.

The cases against Morris and against the four alleged IRA members who allegedly questioned her - Padraic Wilson, Seamus Finucane, Agnes McCrory and Briege Wright - effectively collapsed when Ms Cahill withdrew her evidence. All five were acquitted.

Ms Cahill gave a number of reasons for withdrawing from the case including the length of time - four years - it took to get to trial, “continual adjournments” over the four years, and an alleged prosecution failure to produce intelligence which she believed would have proved her allegations.

The Police Ombudsman Dr Michael Maguire is also investigating her complaints that the police failed to adequately deal with the case. She is due to meet Dr Maguire again next week.

Since Ms Cahill first made her allegations on the BBC Spotlight programme in mid-October the issue has also taken on a significant political dimension with Fine Gael and Labour accusing the republican movement of covering up numerous sex abuse cases by IRA members and of also furtively transferring IRA abusers South of the Border.