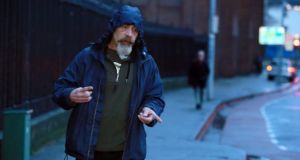 Martin Graham claimed he had accepted cash, clothes and cannabis from gardaí in return for trying to get Ian Bailey to speak about the Sophie Toscan du Plantier’s death.

The death has taken place of an important witness whose handling by gardaí in the investigation into the 1996 murder of French film producer Sophie Toscan du Plantier was strongly criticised by the DPP in a review of the case.

A native of Wiltshire in the UK, Martin Graham (57), who had been living in Ballydehob in West Cork, died on March 10th after a long illness and was buried on Wednesday in Schull Cemetery.

A former British soldier, who had served in Northern Ireland at the height of the Troubles, Mr Graham suffered a mental breakdown after he left the British army and he began living an alternative lifestyle in the UK before coming to West Cork in the autumn of 1996.

Mr Graham became involved in the investigation into Ms Toscan du Plantier’s murder near Schull in December 1996 when gardaí learned he had been staying in a house in Skibbereen on the night that Ian Bailey was released following his first arrest in February 1997 for questioning about the killing.

Mr Graham told of the encounter when he testified for Mr Bailey in 2015 in his unsuccessful High Court action for wrongful arrest and claimed he had accepted cash, clothes and cannabis from gardaí in return for trying to get Mr Bailey to speak about the French film producer’s death.

He told the High Court that he first encountered a very stressed and upset Mr Bailey in a house belonging to artist Russell Barrett in Skibbereen, sometime after Mr Bailey was first arrested in February 1997 in connection with the murder of Ms Toscan du Plantier in late December 1996.

Gardaí later came to the house, asking him and the other occupants about Mr Bailey’s behaviour and mood. Two gardaí introduced themselves as Det Garda Jim Fitzgerald and Det Garda Liam Leahy and he only spoke with them briefly and was concerned not to be seen as “a rat” in the house, he said.

He said he went to the Garda station in Skibbereen a few days later and it was arranged he would meet Det Garda Fitzgerald and Det Garda Leahy at a shrine outside Skibbereen. “I thought it was quite relevant being under the eyes of God,” he said.

He was asked “to befriend Mr Bailey as best I can”, which he thought was ridiculous as he did not know him. “I was constantly being pressed by the police to suggest there was a link between Ian Bailey and Sophie Toscan du Plantier but I didn’t know of any, just what they told me. I just thought it was crazy.”

He told how gardaí showed him the murder scene some days later and they told him what Mr Bailey was supposed to have said about the murder and they later dropped him off at Mr Bailey’s house but Mr Bailey had turned him away and he went back to gardaí.

He said he took it to mean Det Garda Fitzgerald was “going to get me cannabis to loosen Mr Bailey’s tongue”, and he later alleged gardaí met him at a music festival at Kilcrohane and gave him “7 ozs high quality Lebanese flat press”, which was a “significant amount of cannabis” in a police evidence bag.

Det Garda Fitzgerald, now retired, strongly denied that he had ever offered Mr Graham cannabis but he said that by May 1997, he had lost confidence in Mr Graham and had decided to tape him as he had become suspicious of him and felt he was trying to set him up and sell his story to The Sunday World.

“No, I didn’t supply Mr Graham with any cannabis and I couldn’t have supplied him with anything on May 13th,” said Mr Fitzgerald, adding he suspected Mr Graham wanted him to plant evidence linking Mr Bailey to the crime when he gave him a sticker from a medicine bottle with Mr Bailey’s name on it.

Solicitor in the DPP’s office, Robert Sheehan reviewed the garda investigation and concluded the evidence suggested on balance Mr Graham was telling the truth when he alleged he had been offered cannabis by gardaí. “Such investigative practices are clearly unsafe to say the least,” he concluded.