Brexit should not lead to a hard Border, May tells NI Executive 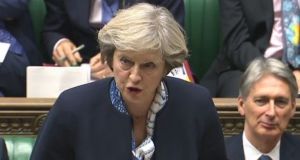 In letters dated last Friday, October 14th, Theresa May responded to the joint letter sent to her by Arlene Foster and Martin McGuinness on August 10th last setting out their concerns over the implications of Brexit for Northern Ireland. Photograph: AFP/Getty Images

The British prime minister Theresa May has written to First Minister Arlene Foster and Deputy First Minister Martin McGuinness repeating her commitment that Brexit should not lead to a hard Border between Northern Ireland and the Republic.

In letters dated last Friday, October 14th, Ms May responded to the joint letter sent to her by Ms Foster and Mr McGuinness on August 10th last setting out their concerns over the implications of Brexit for Northern Ireland.

Ms May, in her response, provided general assurances on Brexit but did not detail any specifics on key issues raised by Ms Foster and Mr McGuinness in their letter sent to her over two months ago.

Opposition politicians at Stormont had been scornful of the fact that it took so long for Ms May to respond to the DUP First Minister and the Sinn Féin Deputy First Minister.

In their letter of last August, Ms Foster and Mr McGuinness raised issues such as trade and energy costs, the threat to the agri-foot sector, maintaining competitiveness and attracting foreign investment in jobs, having access to migrant skilled and unskilled labour, and continued European Union funding.

They also referred to how the Border must not become “a catalyst for illegal activity or compromise in any way the arrangements relating to criminal justice and tackling organised crime”.

“It is equally important that the Border does not create an incentive for those who wish to undermine the peace process and/or the political settlement,” added Ms Foster and Mr McGuinness.

Now, in separate similar letters to both politicians, Ms May said she was “committed to full engagement with the Northern Ireland Executive on the UK’s exit from the EU and will take full account of the specific interests of the people of Northern Ireland in order to get the best deal possible for all parts of our United Kingdom as we leave the EU.”

“I agree with you that the future of the border with Ireland is of the highest priority for Northern Ireland and indeed is an important priority for the UK as a whole,” she said.

Ms May said the British and Irish governments and the Northern Executive had “all been clear that we wish to see the continuance of the free movement of people and goods across the island of Ireland and the maintenance of the Common Travel Area across the whole of the UK and Ireland which has served us well”.

“No one wants to see a return to the borders of the past, the disruption it would bring to the people and businesses crossing the border as part of their daily lives, and the opportunity it could present for those who are not committed to supporting the process and the rule of law,” she added

Ms May said that resolving issues around the all-Ireland single electricity market, the supply of gas, the agri-food industry and structural funding also were a priority.

In her letters, Ms May also formally invited Ms Foster and Mr McGuinness to the next plenary meeting of the Joint Ministerial Committee comprising the Westminster, Northern Ireland, Scottish and Welsh administrations at Downing Street on October 24th, where they could “continue our constructive discussion on this important issue”.