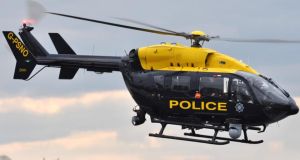 Boy was airlifted to hospital by a police helicopter after falling into River Roe in Co Derry.

The boy was airlifted to hospital by a police helicopter from Roe Valley Park in Limavady.

It is believed that he drowned after falling into the River Roe.

Police and other emergency services were called to the park at around 4.30pm yesterday.

Seven people have drowned during the current spell of warm weather.

Chief executive of Irish Water Safety, John Leech, said many Irish people are not used to swimming in open water.

“One of the reasons we’re losing all these youngish people is because a whole generation haven’t learned to swim in open water,” he said.

Mr Leech also added that 62 per cent of all drownings happen in open water and that 32 per cent of victims have consumed alcohol.

He said on average about 140 people drown in Ireland every year but the number was likely to be higher in 2013.

Irish Water Safety advises swimmers to do the following:

2. Swim within your depth

3. Only drink alcohol after being in the water and do not re-enter after drinking

4. Use local knowledge to determine hazards and the safest areas to swim

5. Ensure that ringbuoys are present

6. Make sure that there is shallow shelving so that you can safely enter and exit the water

7. If there is no lifeguard nearby then only swim at recognized bathing areas