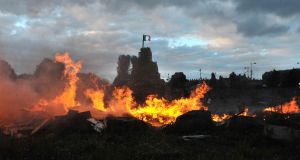 A bonfire being set ablaze at Lanark Way on Belfast’s Shankill Road on the “Eleventh Night”. Photograph: Alan Lewis/Photopress Belfast

Firefighters were summoned to an incident involving a bonfire as huge blazes were lit in loyalist communities across Northern Ireland last night marking the height of the parading season.

The overall number of calls to the Northern Ireland Fire and Rescue Service was lower than last year, an early-evening update said.

The traditional “Eleventh Night” fires mark the start of commemorations of the victory of King William of Orange over King James II at the Battle of the Boyne in 1690.

To their defenders they make for a family-friendly, spectacular celebration of loyalist culture; to their detractors they are potentially dangerous, environmentally damaging, magnets for anti-social behaviour and alienating to nationalists.

There were complaints of the burning of Sinn Féin election posters made for May’s Stormont Assembly elections as well as the use of toxic tyres.

In recent years, bonfire builders have faced criticism after items linked to the republican tradition – such as Tricolours and posters, and effigies of high-profile politicians – were placed on top of some of the fires and torched.

Last year, homes near Chobham Street in east Belfast had to be evacuated over fears the giant nearby bonfire could topple onto property.

Authorities are cautiously optimistic the Twelfth can pass off peacefully. – PA