Banks set for collision course with Government over mortgage rates 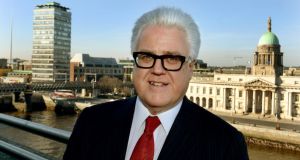 Both Ulster Bank and Bank of Ireland have ruled out any imminent rate cuts for customers with Standard Variable Rate mortgages and set the banks on a collision course with the Government over the issue.

Appearing before the Oireachtas Committee on Finance, Public Expenditure and Reform, Ulster Bank’s chief executive Jim Brown was unapologetic about holding its SVR rate at 4.3 per cent and claimed its variable rate mortgages were “not over priced”.

Mr Brown is now at odds with the Minister for Finance Michael Noonan who said earlier this week that he will ask the State’s banks to cut the cost of variable mortgages and expects them to follow such a recommendation.

For its part, Bank of Ireland defended its SVR rates of 4.5 per cent. When asked directly if it planned to cut its SVRs, ts chief executive Richie Boucher would only say that “we look at our rates on an ongoing basis. I can’t make a commitment today that we will do that,” he said.

The government, which is the majority shareholder of Allied Irish Banks, permanent TSB and controls 14 per cent of Bank of Ireland, is due to have talks on variable rate mortgages with all the banks in the weeks ahead.

Mr Brown insisted repeatedly that his bank’s rate was fair despite the fact that European Central Bank (ECB) base rates are almost zero.

Mr Brown said the narrative that Ulster Bank’s rates should come down just because the cost of funding from the ECB was at an all time low was “incorrect” and he claimed that other costs faced by Ulster Bank were substantially higher in the Republic than in other jurisdictions where it - and its parent company Royal Bank of Scotland - does business.

Specifically, he said that the risks attached to its loan book in the Republic had driven up costs.

“In this context, we do not believe that our SVR is overpriced,” Mr Brown said, listing the cost of the bank’s capital, funding, operations, compliance, management of mortgage arrears, credit losses and levies. “Unless these come down, our standard variable rate mortgage won’t come down.”

The hearing was told that when Ulster Bank does its rate calculations it uses a formula which looks at the history of its loan book dating back as long as 10 years and under that formula, people borrowing from the bank today are deemed riskier than their counterparts in the UK despite the fact that the borrowing process has become considerably more stringent here than was the case during the boom.

Mr Brown’s comments came a week after Allied Irish Banks’ chief executive, David Duffy, appeared before the same committee and suggested that bank would be in a position to lower its SVR rates before the summer.