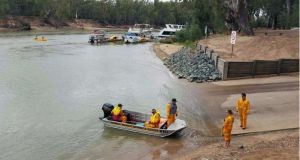 Police and volunteers involved in the search for Niall Quinn in the Murray River. Photograph: ABC News 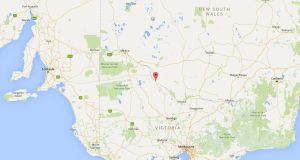 The body of an Irish man who fell from a houseboat into the Murray River, near the New South Wales-Victoria border in Australia has been recovered.

A man from Northern Ireland who died in a river in Australia has been named as Niall Quinn.

Mr Quinn fell from a houseboat into the Murray River at Echuca, on the New South Wales-Victoria border where he was holidaying for the Australia Day long weekend.

The 25-year-old builder had been with a group of friends, who are also Irish, in the vessel’s top deck spa at about 1.40am (2.40pm Friday Irish time) when he fell.

“On the way down he’s actually collided with the bottom deck of the houseboat and fallen into the water and gone under,” said acting superintendent Peter Hayes of the New South Wales police.

Mr Quinn’s friends immediately jumped in after him but lost sight of him in the murky water.

Emergency services search the Murray river at Moama for a 25 yo Irish tourist who fell from a houseboat. @9NewsMelb pic.twitter.com/PpjOFSW0wT

John Mullen, a spokesman for Ambulance Victoria, said paramedics were called to the scene shortly after.

A large-scale search was launched, involving emergency crews from both New South Wales and Victoria, along with ten privately owned boats.

Mr Quinn’s body was found by Victorian police divers at around 3.45pm local time on Saturday.

Police said there did not appear to be any suspicious circumstances surrounding the incident.

It is understood Mr Quinn’s parents are flying to Melbourne from Northern Ireland.

A report is being prepared for the Coroner.

The Murray River is Australia’s longest river, at 2,508 kilometres in length.