Bloom, the annual gardening, food and family festival run by Bord Bia, was officially opened by the President Higgins in the Phoenix park earlier today and attendance was high despite the rainy conditions. Video: Bryan O'Brien 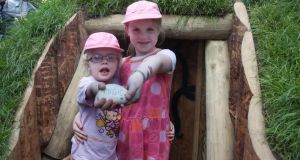 Aoife Doyle (6) and Hannah Doyle (7), both from Carlow, at the Barretstown & Glanbia garden Sowing the Seeds of Magic... at Bloom in the Phoenix PArk, Dublin. Photograph: Gareth Chaney/Collins

After more than 30,000 ice creams and a run on pies, Bloom festival organisers folded up their tents this evening for another year.

The popular combination of gardening and food meant the festival, now in its eighth year, has managed to double attendance since 2007.

In spite of poor forecasts for yesterday and today, the rain stayed away. Bestsellers at the event included chef Donal Skehan’s Skoff pies, which were sold out by lunchtime today, as were Cáis farmhouse cheeses and chopping boards from Caulfield Country Boards.

The Barretstown & Glanbia Sowing the Seeds of Magic garden will be transported in full to Barretstown camp for sick children in Kildare.

The Limerick City of Culture Garden will be rebuilt in the medieval quarter of Limerick.

The overall winner of the concept garden was Messenger designed by Paul Doyle for the Jack and Jill Foundation.

“Bloom is now firmly established in the parklands setting of the Phoenix Park and is regarded as the most important event in the Irish horticulture calendar,” he said.

“Bord Bia is privileged to provide this public showcase of Ireland’s world-class food and horticulture sectors, both of which significantly contribute to Ireland’s economy.”