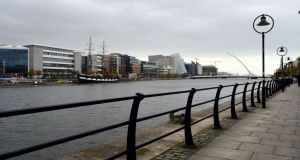 The estimated 2,000 residents at the Spencer Dock apartment complex in Dublin have been told that short-term lets on Airbnb are contrary to their residential and tenancy agreements. Photograph: Dara Mac Donaill / The Irish Times

Residents in one of Ireland’s biggest developments have been banned from renting out their apartments on Airbnb, or other short-term let agencies.

The estimated 2,000 residents at the Spencer Dock apartment complex in Dublin have been told that short-term lets, such as those offered on Airbnb, are contrary to their residential and tenancy agreements.

Indigo Property Management has sent a letter to all residents of the 623 apartments in Spencer Dock in Dublin’s Docklands asking them to stop using their apartments for short-term lets.

Estates manager Andrew Power said the numbers using Airbnb has escalated over the last 18 months and it is creating problems for existing residents.

He said the practice was prevalent among apartments available for short-term letting which are being rented out by property companies which are charging a premium by sub-letting on Airbnb, he said.

The problem is most acute for those living in ground floor apartments in Spencer Dock. They have complained the common areas are like a hotel lobby, with people coming day and night.

Footfall has also increased, with many cleaners coming in and out of the estate.

Mr Power said there have been incidences of anti-social behaviour, especially at weekends, and Spencer Dock security has been called in to remove rowdy guests.

The letter sent to all residents stated the lettings are having a “seriously negative impact on all residents in Spencer Dock by taking away their right to live in their homes in peace and quiet”.

“The intention of this process is to protect and maintain Spencer Dock as a better place to live which will, in turn, safeguard and enhance the value and security of your homes/investments and protect rental yields.”

The letter goes on to state that management has received legal advice to the effect that Airbnb is in breach of covenants contained in the apartment leases and is also contrary to the house rules of Spencer Dock.

The complex’s management intends to take legal proceedings against those in breach of the ban and is already speaking to a number of residents about it.

Mr Power said Indigo Property Management will roll out the ban to the other 30 residential complexes it manages in Dublin, but he stressed there is little demand for Airbnb in the more peripheral locations around Dublin.

He added he was not aware of moves by other management companies to impose a similar blanket ban.

The letter, sent last week, further states that Spencer Dock management was seeking legal advice on the possibility that use of Airbnb by apartment residents was in breach of the terms of planning permission for the development.

Since the letter was sent, An Bord Pleanála has upheld a planning decision that a two-bed property in Temple Bar’s Crown Alley had undergone a material change of use due to its Airbnb activity and was thus not exempt from planning regulations.

The council’s initial decision in favour of TBR was subsequently appealed to An Bord Pleanála by the apartment’s owner in July.