Bishop in plea for tolerance at Arbour Hill memorial to Rising

Annual commemoration honours those who died in Easter 1916 rebellion 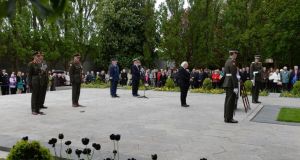 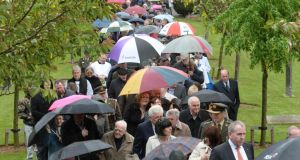 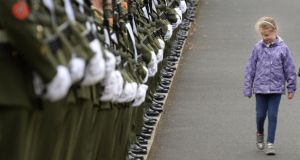 President Michael D Higgins, Taoiseach Enda Kenny and members of the Cabinet were among those present this morning for the annual Arbour Hill Easter Rising commemoration.

The event, also attended by senior members of the judiciary and relatives of those who fought in the Rising, involved 170 members of the Defence Forces.

The multi-faith commemoration service at Arbour Hill Church was led by the Auxiliary Bishop of Dublin, Dr Eamonn Walsh.

In his sermon, Dr Walsh alluded to the centenary this year of the outbreak of the first World War.

He said Irish soldiers in the war had, as historian FX Martin said, been part of the “national amnesia”, quoting from Thomas Kettle’s poem in which he wrote that those who died in the first World War did not die for King or Kaiser but “for a dream, born in a herdsman’s shed. And for the Secret Scripture of the poor”.

Dr Walsh made a plea for toleration, and spoke of how Irish Parliamentary Party MP John Dillon’s call for a halt to the execution of the leaders of the 1916 Rising was not heeded in the House of Commons.

The bishop said Dillon’s experience had shown the necessity of the other side being heard in a conflict. “Audi alteram partem (listen to the other side) is a basic rule in resolving any issue - be it a family squabble or on the international stage,” he said.

He maintained it was not easy to listen to those “who may irritate us most”, but it was necessary.

“From experience we know that the longer a voice is suppressed, the stronger the force and resentment that will accompany it when it eventually explodes and has to be heard.”

He said the ability to listen to each other without prejudice would be a “good hook on which to build preparations for the 1916 centenary and the Ireland beyond”.

A guard of honour drawn from 28 Infantry Battalion and 2nd Cavalry Squadron was on hand, along with the Army No 1 band.

The graveside honour guard was provided by the officer in charge, Capt Rory Arnott, with cadets drawn from 90th Cadet Class at the Defence Forces training centre.

After Mass, the President laid a wreath at the grave of the executed 1916 leaders.