Berkeley a year on: Out of the shadows they came to help

A year after the tragedy in which six died, the ‘meitheal’ of the Irish community is recalled 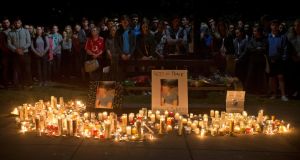 Young mourners, many J1 students, attend a candlelight vigil in Berkeley the night after the Irish students were killed when a balcony in an apartment collapsed during a party. Photograph: Beck Diefenbach/AP Photo

He is an Irish guy, originally from Longford. A year on, he is still unnamed. He runs a small landscaping business up in Vallejo in the northern part of the San Francisco Bay Area.

Last June, he knew none of the five Dublin students or the young Irish-American woman killed when the balcony they were standing on in an apartment block in Berkeley, California collapsed.

Nor did he know the seven other Irish students injured in the tragedy, or their families. But he felt compelled to help.

The Irish man sent care packages to the students being treated in the various hospitals in the Bay Area and their families as they struggled to deal with the aftermath of the horrific night on June 16th, 2015.

“I don’t know you, you don’t know me, but here is a little gift of kindness from home,” read the note enclosed in the packages.

They contained Tayto crisps, Barry’s Tea, Irish butter, chocolate and cheese, all comforts from home at a time of great distress and grief 8,000km away from home.

“For all the families, this kind of blew them away,” said Celine Kennelly, executive director of the Irish Immigration Pastoral Centre in San Francisco, which along with the Irish Consulate in the city, was at the centre of the crisis response to one of the worst accidents to affect young Irish people living abroad.

One year on from the tragedy, Kennelly remembers all the crisps and the tea. The gifts were examples of the random acts of kindness shown by the Irish community in the Bay Area as they came together to embrace the families dealing with unimaginable grief, loss and trauma during that tragic week.

“A mosaic of goodness” is how Fr Brendan McBride, sitting in his office in the pastoral centre, remembers how the Irish community rallied around the Berkeley families. They arrived, grief-stricken, to bring their children home or to see how a fall from a fifth-floor balcony had left their loved ones.

“The Irish have an ability to pull one another back. Here we discovered through the whole Berkeley tragedy the innate goodness of the community,” said the Donegal-born priest, who founded the centre 19 years ago.

“The legacy is that they have discovered that gentle, caring side of them. To me that is the biggest thing that came out of Berkeley.”

Fr McBride will co-celebrate mass to mark the one-year anniversary of the tragedy today at St Columba’s Church in Oakland, the church where the remains of four students, Nick Schuster, Eimear Walsh, Lorcán Miller and Eoghan Culligan, were brought in the days after the tragedy before being flown home.

Sitting opposite Fr McBride at the pastoral centre, she recalls the reaction of the Irish community in the aftermath of Berkeley and two incidents in particular.

The day after the tragedy, Philip Grant, the Irish Consul General in San Francisco, had called again. The families of the students were landing at the airport and needed to be transported around various parts of the Bay Area. Kennelly was sitting at her kitchen table and had the passenger manifest from Aer Lingus with the list of family members and the list of hospitals where they needed to go to.

“Within 45 minutes, we had seven SUVs and had a conference call with the owners. ‘Can you please hold, you are about to get your instructions? This is what you do. You go to this part of the airport and pull into the cell phone parking lot and each of you have been assigned a family and your destination is this hospital and this hotel.’

“They were just so fabulous. They were all parents and had come here as young immigrants, so they had seen what it was like to go through the immigrant experience.”

He went into a very busy phone shop in Berkeley, stood inside the door and announced that he was working for the people involved in the balcony accident up the street and he needed seven phones and needed them now. All of the staff helped immediately and 45 minutes later he had seven American mobile phones.

President Michael D Higgins used the Irish word meitheal – a collective effort for the greater good of the community – to describe the response of Irish in the Bay Area to the Berkeley tragedy when he visited the California university town last September to honour the first responders who rushed to the scene of the accident.

“The response to Berkeley brought out everything that is good about the Irish community,” said Kennelly. “Meitheal was in full force.”

Mr Higgins, on his visit, evoked more Irish words that captured the essence of how the Irish live in the Bay Area and react when tragedy strikes: “Ar scáth a chéile a mhaireann na daoine,” or “In the shadow of each other, we live.”

It’s easy to walk past the narrow stairway up to the pastoral centre on Geary Street in San Francisco’s Richmond neighbourhood. On the ground level there is a Russian grocery store, a Chinese restaurant and the Nag’s Head pub, but upstairs the work of the pastoral centre casts a huge shadow over the Irish community. In the week after Berkeley it was a comforting shadow, offering support and help.

For Philip Grant, one of the standout moments of support in the aftermath of Berkeley was shown by the Irish J1 students in the Bay Area. When he needed to find out the names of the students who were on the balcony, “it was through the J1 friends,” he said. Then there was the hastily organised vigil in a public park in Berkeley when several hundred J1 students showed up to pay their respects.

“It showed a truer face of the J1 programme. It is not about drunken students or houses being trashed. When they had to deal responsibly and deal with a very difficult situation, they handled themselves incredibly,” said Grant.

He too leaned heavily on the Irish community and beyond after Berkeley. An Irish-American contact at the San Francisco Giants baseball team helped organise buses to transport J1 students from Berkeley to Rohnert Park, an hour north of Berkeley, for the funerals of cousins Ashley Donohoe and Olivia Burke.

The direct Aer Lingus route to San Francisco proved invaluable and the airline was remarkably responsive to the needs of the families, according to Grant.

“Berkeley showed a more accurate face of what the community is like and what the immigrant experience is like, and how you connect with immigrant communities, especially with the deep ties that exist between Ireland and the Bay Area,” he said.

“I have a stronger community as a result. The pastoral centre was tested. You look at the return we got from what we are doing with the [Government-funded] immigrant support programme. If I had the Red Cross next to me I don’t think they could have done a better job.”

At her desk, Kennelly scans the list of donors that contributed more than $400,000 in 2,387 donations to the Irish J1 Berkeley Tragedy relief fund. There were the $107,000 and $100,000 contributions respectively from the Iris O’Brien Foundation, the charitable foundation of businessman Denis O’Brien, and the philanthropic Ireland Funds, but there were smaller contributions too.

The Irish Society in Riyadh sent $12,000, Friends of St Patrick in Hawaii sent $3,300 and Flanagan’s Irish Pub in Vienna, $2,200. Another $30 came from someone in Mayo and $25 from Abbeyfeale, Co Limerick. “So happy to help my fellow Irish,” wrote one donor from London. “Wish I could afford to give more,” wrote one couple in Tralee who pledged $10.

Scrolling down the list and you can see donations from all around the world: Seattle, Phoenix, New York, Vancouver, Bondi Junction.

“There is so much that happened last summer that would restore your faith in humanity,” she said. “It would make you proud to be Irish.”