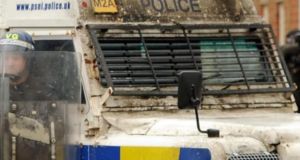 The Orange Order hall in Clifton Street, Belfast, has been attacked a dozen times in the last year.

The latest paint bomb attack on the Orange Order hall in Clifton Street close to city centre Belfast has been condemned as a “sectarian hate crime” by DUP councillor Lee Reynolds.

A number of paint bombs were thrown at the hall, near Carlisle Circus around 7pm yesterday evening. It was the seventh such attack since July of last year. It was the twelfth reported attack on Orange property this year.

The Belfast county grand master George Chittick claimed the attack was a “deliberate and obvious attempt to raise tensions” ahead of the Royal Black Institution’s parade in the area on Saturday. He appealed for calm.

Mr Reynolds also said the incident was “part of an ongoing pattern by republicans to stoke up tensions”. It was vital there was no retaliation to such “provocative” attacks, he added.

“I call on leaders within our city to make it clear that Orange culture is not just to be tolerated but celebrated as part of our cultural diversity. The apprehension of the culprits and the rejection of their hatred by all would be the best response to this latest incident,” said Mr Reynolds.