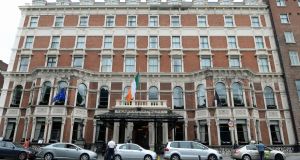 A couple who survived the Batalcan attacks have expressed concern over the manner in which the Shelbourne Hotel was evacuated after a fire alarm went off in the hotel on three separate occasions in the middle of night. Photograph: Frank Miller/The Irish Times

The Shelbourne Hotel has insisted “correct protocols” were followed after it was criticised for not assisting a wheelchair-bound survivor of the Bataclan massacre in Paris to leave a fifth-floor room during a hotel evacuation last night.

Katie Healy and David Nolan survived the terrorist attack in Paris in November and had travelled to Dublin to talk about their experience on the Marian Finucane Show on Saturday morning. They stayed in the five-star hotel on St Stephen’s Green.

The couple expressed concern over the manner in which the hotel was evacuated after a fire alarm went off in the hotel on three separate occasions in the middle of night.

On the first occasion, the couple called the front desk and were told it was a false alarm. Mr Nolan told hotel staff he was in a wheelchair after suffering gunshot wounds in the Bataclan attack.

The alarm went off again and then again and on the third occasion the couple were advised to make their way down to the hotel lobby.

“I was in a room that’s for wheelchairs,” he said on radio. “I wasn’t offered any kind of assistance or anything like that to come down. It was five flights of stairs on crutches. In cases like this it is quite difficult for someone to get back down. I had to use my crutches and go down the fire escape slowly.”

“I just felt a bit shaky when it happened,” Ms Healy said. “It was a Friday night. It was nine weeks to the day since it happened. David specifically made them aware when we rang down the first time that we were both a little nervous due to being in Paris and he was in a wheelchair and using crutches.”

The couple accepted that false alarms sometimes happen and in other circumstances they would probably have been in a position to laugh about it. But Mr Nolan said “there seemed to be no evacuation plan in place.”

In response to the criticism the hotel insisted that all the correct procedures had been followed following the false alarm.

“We are currently conducting an investigation into what caused a fault in the fire alarm which led to the hotel being evacuated last night,” a spokeswoman said.

“While we quickly identified that there was no fire anywhere in the hotel, during the incident the fire team and management followed correct protocols designed to ensure the safety of our guests and staff.”