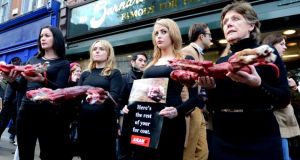 Animal rights protesters have demonstrated outside the capital’s oldest and most esteemed fur shop to mark International Fur-Free Friday.

Some two dozen protesters demonstrated outside JM Barnardo & Sons furriers at the bottom of Grafton Street, which is the oldest family furrier in the world.

Barnardo was established in 1812 by the father of Dr Thomas Barnardo who went on to found the famous children’s charity of the same name.

The protesters held up life-like representations of the bodies of foxes who had been skinned for fur. The fur on the fake animals though was real.

The protest was organised by the animal rights group Animal Rights Action Network which has repeatedly targeted fur shops in recent years.

Organiser John Carmody said the purpose of the demonstration was to try and persuade Christmas shoppers not to buy fur clothing for Christmas.

Aran spokesman John Carmody said Christmas shoppers had a choice to be “cruel or to be kind. By choosing to stay away from fur, they’re taking the kind option.”

Shop owner Caroline Barnardo said she felt sorry for the protesters and questioned whether or not they had anything better to do with their time.

“It is an insult to the animal as well as everyone else,” she said. “Animals would have awful fur if they were treated cruelly. If you were sick for a day, your hair would look awful. That’s the same with the animals.”

Mrs Barnardo compared Mr Carmody to a “wooden spoon because he stirs it all up”.

She said, as a farmer’s daughter, that she knew the facts of fur farming better than the protesters. “I know the minxes are very carefully looked after. I’m a professional at my own job.”