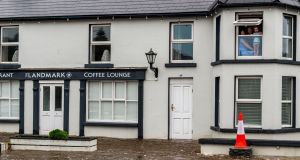 Floods are seen in Rosscarberry in West Cork, on Saturday. The Landmark restaurant was hit badly with flood waters breaching the doors. Photograph: Andy Gibson 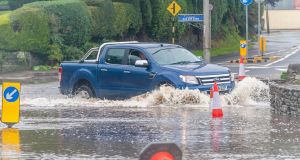 A motorist tried to drive through flooded roads in Rosscarberry, West Cork over the weekend. Photograph: Andy Gibson

The advisory is bad news for holidaymakers and farmers with heavy rain expected on Monday, Tuesday and Wednesday while Thursday and Friday will also be windy as well as wet, possibly resulting in unsafe conditions over high ground, lakes and sea areas.

Weather advisories may be issued by Met Éireann to provide early information on potential hazardous weather beyond 48 hours.

A 24-hour status yellow rain alert came into force for the south of the country on Monday morning with a warning over possible localised flooding.

The warning is in place for all Munster counties and for Carlow, Kildare, Kilkenny, Laois, Wexford, Wicklow, Offaly and Galway and will remain in place until 7am on Tuesday.

Between 25mm to 40mms of rain is forecast over 24 hours with the heaviest of the rain falling overnight.

Wednesday will also be wet as the remnants of ex-Tropical Storm Kyle crosses Ireland bringing with it heavy rain spreading from the south northwards.

More heavy rain is likely to compound the problems created by flash flooding in West Cork over the weekend following heavy rain.

The flooding severely damaged around 15 roads in the Rosscarbery area on Saturday.

Taoiseach Micheál Martin has promised emergency funding to deal with the damage.

The European Centre for Medium-Range Weather Forecasts (ECMRF) is expecting between 50mms and 75mms of rain in the west and south this week with Cork as the worst-affected county.

While temperatures were well above average last week, especially in the west, this week will see cooler more unsettled weather.

Met Éireann’s Matthew Martin said the forecaster may well issue further weather warnings closer to the time. Wind speeds can be dangerous during the summer when the trees are still in full leaf and there is a lot of activity around. The impact from them will be greater than if it occurred in December.

“The winds and rain will be very anomalous for this time of year. We are in for a very unsettled period of weather. It will disrupt any staycation plans.”

Tuesday be mostly cloudy in the north of the country with more rain that will gradually clear northwards in the afternoon and evening.

It will be brighter in the southern half of the country will sunshine and showers, some of them heavy. The highest temperatures will be between 18 to 22 degrees with light breezes.

Wednesday will see more heavy rain in Munster and south Leinster spreading northwards. It will clear through the evening but more showers will follow during the night. Gusty winds will continue and become stronger as the rain clears.

On Thursday the heaviest rain will be in the northern half of the country both during the day and at night. It will be a mild but windy with further rain during the night.

Similar rainy and blustery conditions will continue on Friday with highest temperatures between 16 to 19 degrees.

Saturday and Sunday are expected to remain unsettled. Fresh and breezy days with sunshine and showers at times as an Atlantic system bringing wind and rain to most parts of the country.

The long-term forecast suggests the early days of next week will remain cool and unsettled with spells of rain or showers.

Temperatures will be on or about normal for the time of year with highs most days of 20 degrees.