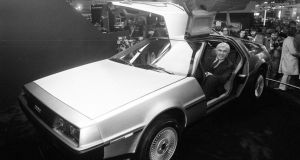 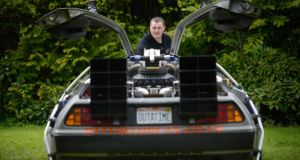 Tom Reddaway with his DeLorean at the Ulster Folk and Transport Museum. Photo Colm Lenaghan/Pacemaker 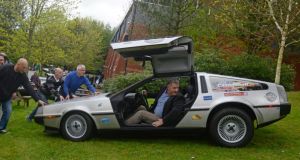 Former DeLorean employees from Britain, South Africa and the United States have travelled to Northern Ireland to join former colleagues in Belfast for a reunion celebrating the gull-winged sports car.

A collection of 24 cars, the first of which rolled off the production line in Co Antrim on January 21st, 1981, were on display at the Cultra venue, which incorporates a gallery dedicated to the ill-fated DeLorean Motor Company.

The car, a favourite with motor enthusiasts, came to worldwide attention after it featured as a time-travel machine in the film franchise Back to the Future, starring Michael J Fox and Christopher Lloyd.

But the DeLorean dream ended and the Dunmurry plant closed when the British prime minister of the time Margaret Thatcher thwarted a bid by private-sector interests to rescue John DeLorean’s firm, which had been given £80 million by the previous Labour direct-rule administration.

It has been 35 years since the first DeLorean DMC-12 was shown publicly at the North American Dealers’ Association convention in New Orleans. Today some 6,500 of the 9,080 DeLoreans produced in the 1980s are still on the road.

Joe Murray (72) and John Mageean (81) from Belfast told The Irish Times they enjoyed working for DeLorean in Dunmurry. Mageean was an instructor on interior trims and a problem solver.

“I had a fantastic time working there,” he said. “We knew it was a new venture and everybody buckled down and worked hard. People wanted to get a trade that would stand them in good stead.

“There was great excitement and enthusiasm, but then of course politics entered it and Maggie Thatcher pulled the plug. No money, John [DeLorean] was arrested on drug charges and then it died a death.”

Murray said: “There were great terms and conditions and the money was fantastic. I could have been in the canteen doing a bit of painting and decorating or I might have been in the boiler house or John DeLorean’s office. He was a very charismatic guy.”

“There is great interest in the DeLorean. Northern Ireland is missing out. It should celebrate a minor miracle that occurred all those years ago with a DeLorean project,” he said.

Meanwhile, electrical-engineering students from Queen’s University Belfast are working on an electric version of a DeLorean.