Author says time has come for peace walls to come down 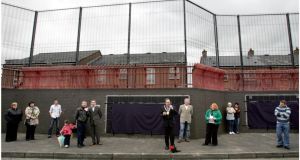 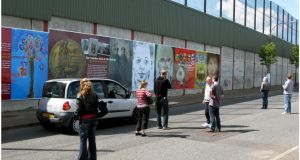 Tourists at the wall on Cupar Street, off Shankill Road. Photograph: David Sleator 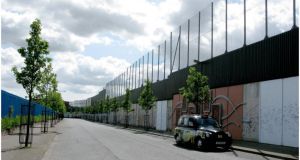 Another view of the Cupar Street wall. Photograph: David Sleator

The big questions asked in Vicky Cosstick’s book, Belfast: Towards a City Without Walls, are: will the peace walls ever come down, and will Martin McGuinness and Peter Robinson be proved correct in predicting it will happen by 2023?

The old saw about good fences making good neighbours can have a real and deadly connotation in Belfast. For many people therefore it’s better to have the walls than the sectarian threat. Cosstick in her book questions that view and explores how, whether and when the Protestant and Catholic communities should take the risk of bringing down the structures.

The book provides the perspectives of the outsider and the insider. The latter is Frankie Quinn from the nationalist Short Strand in east Belfast. He’s the local man well acquainted with the North’s strong degrees of separation who provides the stark black and white pictures in this book.

Cosstick is the interested English outsider, trying to offer a “fresh eye” to a phenomenon that to many people is invisible. And the fact is, as Cosstick keenly notes, that for most people in Northern Ireland the walls are just a natural part of the street scenery. Most are now too inured to these high, long brick and metal structures to be outraged by them. But not Cosstick.

“It is often said that the closer you get to the walls the less you see them,” she says. “A privilege of my position has been that I have been able to gain a ‘helicopter view’ of the world around the walls – and I continue to be shocked by them. I think they are a slight on humanity.”

A journalist, academic and sociologist, she first arrived in Northern Ireland in 1977 and has been returning at least once a year since. “I fell in love with Ireland,” she says, and it is true – to such an extent that she and her husband of 45 years, Kelvin Walton, have a holiday home at Lough Gartan near Churchill in Co Donegal.

Her book examines how progress could be made through dialogue, regeneration, through art and architecture, with the help of the communities, the former paramilitaries, the politicians, the churches, and through business and tourism.

She is probably fairly correct when she says that the media responded to Robinson and McGuinness’s May 2013 prediction “with derision and widespread cynicism” although that wasn’t the universal view.

It must be recalled that that forecast was made in the aftermath of the Belfast City Council decision to restrict the flying of the British union flag, that appeared to be ripping community relations apart. Talk of walls coming down seemed incongruous.

And it must also be said that when Robinson and McGuinness were outlining a range of measures to tackle sectarianism it was the Sinn Féin Deputy First Minister who made the 2023 prediction. The DUP First Minister did not demur but equally he had the look of a man saying to himself, “Martin, you’re over-egging it again.”

But Cosstick travels with hope. Wearing her academic hat she refers to complexity theory which, she says, points to “small, gradual changes resulting in big effects”. She notes small-scale progress at the interfaces – “a gate open for a few hours a day here, a fence lowered there, toughened glass replacing steel grilles on windows that have not been cleaned for decades”.

There’s merit in that argument. The Twelfth of July violence in north Belfast made headlines but that trouble was focused on just one location on a day when dozens of main and feeder parades were taking place peacefully throughout the North.

One point that Cosstick acknowledges is that “no one knows exactly how many walls and interfaces there actually are” although she works on a round figure of 100. As she says the “wall usually said to have been the first built is Cupar Way”, initially erected by the British army in 1969 as a barbed-wire barricade to separate the nationalist greater Falls area from the loyalist greater Shankill.

Over the years that was transformed into a four-and-a-half metre high, half-a-mile long wall. It is now embellished with professional art and graffiti and is much visited by tourists.

It’s almost beyond irony that the last one erected was in 2007 in the grounds of the Hazelwood Integrated Primary School in north Belfast.

It was Cosstick’s anger and shock at these physical community barriers that moved her to write about them. She says she was “scandalised” that 15 years after the Belfast Agreement they were still standing.

Her conviction is that “change actually takes place through relationships and conversations, in particular through uncomfortable, edgy conversations among diverse agents, conversations which are often informal and cause perplexity, reflection, thinking and rethinking – conversations which help to change people’s minds, or to come to some new shared understanding or consensus.”

Cosstick writes about the need for political leadership and politicians taking challenging decisions.

Belfast: Towards a City Without Walls by Vicky Cosstick. Photographs by Frankie Quinn. Colourpoint Books. £15.