Actress agonises over her second divorce in hand-written correspondence 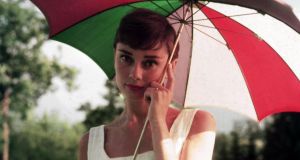 Audrey Hepburn: In 1981, she wrote a letter to Fidelma Hepburn, her father’s widow

An agonising letter from the actress Audrey Hepburn to her Irish stepmother in Dublin is to go for auction later this month.

The letter was sent in April 1981 from her home in Switzerland to an address in Ballsbridge. It is addressed to Fidelma Hepburn (née Walshe) who married Hepburn’s father Anthony Hepburn-Ruston.

Czech-born Ruston settled in London before the second World War but became a supporter of Oswald Mosley, the British fascist leader.

Hepburn-Ruston was detained for the duration of the war in a camp in the Isle of Man. He moved to Ireland after the war and married his third wife Fidelma Walshe, a woman half his age. He died in 1980, a year before the letter to Fidelma Walshe was sent, and is buried in Mount Jerome Cemetery.

In the letter, Audrey Hepburn laments the end of her second marriage to Italian psychiatrist Andrea Dotti. She also writes of her holiday with her son Luca and the condition of her frail, ageing mother.

“I am in the middle of the divorce, all so sad and wearing, how I prayed it would never come to this! Now I long for it all to be over. I can understand how sad and empty you must feel, yet so much love and happiness to look back on.”

The letter will be auctioned by Boston-based company RR Auction on March 20th. It has a minimum reserve of $200 (€180) but is likely to fetch a figure well in excess of that.

Hepburn only appeared in 19 films, but among them were enduring classic such as Roman Holiday, Breakfast at Tiffany’s and My Fair Lady.

She also became a style icon with her look which included a black dress, a multistrand pearl necklace, a cigarette at the end of a long cigarette holder and large sunglasses. She died in 1993.