Attack on Burntollet march in Derry occurred 50 years ago today 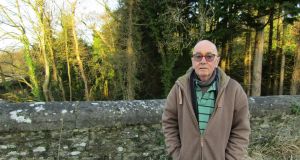 Vinny McCormack, one of the 1969 marchers who took refuge in the nearby river. “It was almost like a military operation, and that’s what startled us. The rocks came first of all, and then the attackers.” Photograph: Freya McClements

Fifty years ago today, Michael Farrell stood on Burntollet Bridge, Co Derry, surrounded by civil rights marchers, many of them injured and bleeding. Less than an hour before, he had stood at the head of a peaceful march.

Now a policeman told him urgently: “You’d better get out of here immediately or they’ll kill you.”

The march had been organised by the People’s Democracy movement, inspired by the Selma to Montgomery marches in the United States led by Martin Luther King.

Forty people, many Queen’s University Belfast students and graduates, had left Belfast for Derry on New Year’s Day. Their numbers grew as they marched, harassed by loyalists and rerouted by the Royal Ulster Constabulary (RUC).

On January 4th they were ambushed at Burntollet, near Derry. “There was a police jeep in front of us, and a group of 5 or 6 RUC men who stopped the jeep and took out shields and helmets and put them on, and that’s when I realised something more serious was happening,” remembers Farrell.

Stones began raining down. Up to 300 loyalists swarmed on to the narrow country road. “I saw clubs, but other people saw clubs with nails through them, and iron bars.

“The police moved back from the side of the road, leaving the march open to attack,” says marcher Vinny McCormack. “It was almost like a military operation, and that’s what startled us. The rocks came first of all, and then the attackers.”

Soon, they were being attacked with batons. Many of the attackers wore the white armbands used by the auxiliary police force, the B-Specials.

McCormack took refuge in the freezing river Faughan. “I was very frightened. So long as we were in the river we seemed to be fairly safe, but I was very, very frightened,” he says.

“I could see people with blood pouring out of their heads,” says Farrell, “and people were saying to me that so many had been taken to hospital.

“I saw several police vehicles there with police sitting in them. And there was a crowd of guys with white armbands on, with their clubs, smoking, and having a rest and some of them were chatting to the police.

Farrell was shocked. “There had been a very brutal attack, and here the police were just sitting fraternising with the attackers.”

The attacks continued as the marchers made their way into Derry city through the predominantly Protestant Waterside – at Irish Street, and at Spencer Road.

A then 13-year-old schoolboy, Paul O’Connor, remembers walking out with two friends, still dressed in his St Columb’s College uniform, to meet the marchers.

O’Connor was unhurt; Farrell was hit “by a big chunk of stone” and knocked unconscious: “I remember one of the nurses saying to me, ‘You people deserve this, bringing trouble into our town’.”

However, several thousand people had gathered in Guildhall Square to welcome the remaining marchers. “It was a big moral victory,” says O’Connor. “It was very emotional.”

That night the RUC ran amok in the Catholic Bogside, smashing windows, shouting sectarian abuse and beating anyone who tried to oppose them.

Burntollet was a turning point, says O’Connor: “Not because the march had been attacked, because in some ways that was to be expected, but because the forces of law and order colluded entirely in that attack from beginning to end, and there were no consequences, no accountability.”

“This was the moment the British should have said, bring in one man-one vote,” says Farrell. “If [Terence] O’Neill [the prime minister of Northern Ireland] couldn’t get his Cabinet to agree, that was the point at which they should have said either you do it, or we take over and we do it.”

One man-one vote came four months later, but it was too late. By then, Derry had erupted in serious rioting, and father-of-10 Samuel Devenney had died after he was badly beaten by the RUC.

The “real responsibility” lay with London, Farrell argues: “[They] just didn’t take enough interest in the place and were not willing to intervene seriously at an early stage.”

Spurred by the reaction to Burntollet, the B-Specials were disbanded a year later, but real police reform would not happen for nearly two decades, until the Patten Commission, says McCormack.

“It was clear that there were severe inequalities but it was very difficult, once the violence started to gather pace, to even get a hearing regarding – for example, the need for anti-discriminatory legislation.

“It made provision for equality and human rights both north and south of the Border, yet now the human rights commissions for both Northern and southern Ireland have said they’re concerned Brexit might lead to a situation where people did not have the same access to rights in both jurisdictions,” he said.

Farrell – now a solicitor and a member of the Council of Europe’s Coalition against Racism and Intolerance – is equally concerned about the implications of Brexit.

“It is deeply divisive, and there is a danger that if it goes through with a Conservative government in Britain there will be a dismantling of the human rights protections of the Good Friday agreement and there will be a removing of the European Union Charter of Fundamental Rights.

“That is a step backwards. To me the Good Friday agreement has delivered what the civil rights movement was looking for, but it has to be defended.”

For Farrell, the lesson of the civil rights movement is that it is possible to achieve change – “even if the parliamentary system is not working, as it clearly isn’t in the North at the moment”.

1 Sil Fox tells of ‘months of hell’ as he is cleared of sex assault on woman in bar
2 Trump threatens to ‘close down’ social media companies after Twitter fact-check
3 Coronavirus: Denmark is reopening society quickly. How is it faring?
4 Miriam Lord: Leo’s Phoenix pecs just a storm in a bag of cans
5 O’Doherty and Waters to appeal court’s dismissal of legal action
Real news has value SUBSCRIBE