Arlene Foster: UK must now “get on with” quitting European Union 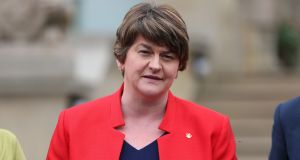 Mr McGuinness said Brexit was not a “done deal” as regards Northern Ireland while Ms Foster said politicians must “get on with” quitting the European Union.

On Sunday, Mr McGuinness insisted the fact that a majority of people in the North voted to remain in the EU “must be recognised and respected in any negotiations”.

At a Stormont press conference yesterday, he said the British government does not care about the people of Northern Ireland.

“It is quite obvious the British government is on a collision course with the EU, in which our economy and successive agreements are regarded as collateral damage,” said Sinn Féin’s Deputy First Minister.

“This is more about the internal division within the British Tory party, which clearly has no clue whatsoever about what it is facing,” he added.

“None of this is a done deal, and it is important that people mobilise in a campaign to confront the selfish approach of the British government, which holds out the potential to hugely damage our economy,” said Mr McGuinness.

In the Assembly chamber, however, the DUP First Minister said the result was binding on Northern Ireland.

Get on with it

Meanwhile, at Belfast High Court today, two challenges to the Brexit will open.

One is being taken by victims rights’ campaigner Raymond McCord,. The other is by a group that includes politicians such as SDLP and Alliance leaders Colum Eastwood and David Ford.

The second group is demanding that the British government must legally accord “adequate weight” to the fact that a majority of people in Northern Ireland voted to remain in the EU and that, in relation to the 1998 Belfast Agreement, the “unique requirements of Northern Ireland constitutional law and statute” must be safeguarded.