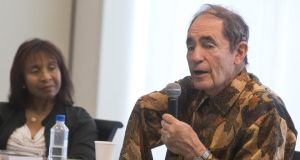 Seven-year-old Oliver Sachs can be heard playing in the background as his father, Albie, speaks over Skype from his home in Cape Town. “People say he keeps me young,” Sachs says of the boy. “I retort, I keep him young because he gives me a chance to be really infantile, and that’s great fun for us both.”

At 79, a lifetime separates the retired constitutional court judge from his third son. The South Africa into which young Oliver arrived is a very different country from that of his father’s upbringing. Current issues around crime and violence notwithstanding, Oliver was born in a free South Africa. And for that fact alone, his father can take some credit.

When he addresses the Public Interest Law Alliance conference in Dublin this Friday, Sachs will no doubt mention the kitchen table in Kader Asmal’s former Dublin residence. It was sitting there, in the late 1980s, that he started work on the first draft of South Africa’s bill of rights, a document which would become integral to the country’s new constitution.

Shortly beforehand, he was almost killed by a car bomb in Mozambique. South African security agents orchestrated the attack in which the ANC activist lost his right arm and the sight in his left eye. Despite the injuries, Sachs’s very survival made him feel “joyously alive”. As he told the Guardian a couple of years ago, he had the “absolute conviction” that as he got better, his country would get better.

Bill of rights
After leaving hospital, he was tasked by the constitutional committee of the ANC with drafting the bill of rights for his country. “It was phenomenal for me,” Sachs recalls. He travelled to Dublin to work with Asmal, then a law lecturer in Trinity. “We were aware at the time of the momentous nature of what we were doing,” he said later. Sachs would go on to play an instrumental role in South Africa’s transition to a constitutional democracy.

In 1994, the newly elected president Nelson Mandela appointed him to the fledgling constitutional court, set up to enforce the country’s new constitution, of which he had been a major architect. Now, some two decades on, he considers that document the country’s “greatest achievement”, one of which he is “exceptionally proud”.

Born in Johannesburg in 1935 to parents of Lithuanian Jewish background, Sachs began his anti-apartheid activism early.

In 1952, the 17-year-old University of Cape Town law student attended the Congress of the People where the Freedom Charter was adopted. At 21 he faced harassment from the security police for his work as an advocate at the Cape Town Bar, with most of his clients charged with offences under the apartheid statutes. His movements were restricted and at one stage he was subjected to 168 days in solitary confinement without trial.

He went into exile in 1966, spending 11 years in England where he studied and taught law and then a further 11 years in Mozambique as a legal researcher and professor.

During this time he worked closely with ANC leader Oliver Tambo, helping to draft the organisation’s code of conduct and other statutes.

The car bomb attack in the Mozambique capital Maputo did nothing to diminish his determination to fight apartheid (he titled the account of the assassination attempt and his recovery, Soft Vengeance of a Freedom Fighter ).

He recuperated in London and then worked on the bill of rights with Kader Asmal, himself also living in exile. The decision to travel to Asmal’s south Dublin home was a practical one (the lecturer couldn’t get away from work), but Sachs says Ireland still spoke to him in a way England did not.

“When I crossed over to Ireland I could use words like freedom and I wouldn’t have to explain,” he says. “In England somebody might say, ‘Well, it all depends upon how you define freedom’. If you’re not feeling freedom in your heart, if you don’t feel it as part of your spiritual make-up, of your being, of who you are, you’re not going to get it through definitions. In Ireland I didn’t have to define.”

When Sachs returns to Dublin this week he will find a country tinkering with its own constitution. The Constitutional Convention has just finished its deliberations and soon the public will get the opportunity to change certain aspects of Bunreacht na hÉireann , such as providing for same-sex marriage.

Sachs says South Africa’s constitution is still “standing up very well”. So does the apparent need for revision in Ireland hint at flaws or simply the inevitable shifting of public opinion with time?

“Strong clerical influence did a lot to shape many important features of the constitution of the 1930s,” Sachs says with a touch of diplomacy, acknowledging that, institutionally, Ireland has changed a great deal since then.

Yet despite the country’s “very progressive” international reputation, echoes of that clerical influence remain. He points to the thousands of women travelling every year to the United Kingdom for abortions and says “it does raise into question the ideological practice that may lead to that kind of situation”.

During his time on the constitutional court, Sachs was involved in a number of prominent cases, among them 2005’s Minister of Home Affairs v Fourie , which found it unconstitutional to prevent same-sex couples marrying. Does it surprise him that it’s taken Ireland so long to address the question of gay marriage?

“Yeah, it surprises me and it doesn’t surprise me because contradictions run right through Irish history and Irish culture,” he says. “It’s not a boring society, let me put it that way. It’s not a predictable society, it’s not a society you can pigeon hole easily.”

Every constitution has a central source of controversy that must be resolved, he believes. For an independent South Africa the challenge was creating a way to protect whites from being arbitrarily treated without building a minority veto into the constitutional system.

“The answer that came early from Oliver Tambo ... was to say there will be protection for whites, but not as whites – as human beings. Human dignity is at the centre of our whole constitutional project and we ran a very strong bill of rights which would protect all people, majorities and minorities, from abuse.”

Mandela’s reputation
Sachs believes the constitution, frequently cited as one of the world’s most progressive, enhanced Mandela’s reputation. “I think a lot of the honour that appropriately went to Nelson Mandela is associated with that project. It wasn’t just a person, it was a set of values and mechanisms and procedures that somehow people could identify with Nelson Mandela.”

He adds: “I think Mandela’s death and the universal acknowledgement of his role was a reminder to all South Africans of what we’ve accomplished, what we can do, what we’ve achieved and as a measure of what our goals and aims should be, and I think it was a timely reminder.”

Part of appreciating the country’s accomplishment is remembering its struggle for freedom.

Sachs enjoys life in Cape Town now with his second wife Vanessa, Oliver’s mother. In a recent documentary, he is seen sitting beside his young son at the spot in Maputo where he was blown up.

“I wanted him to go there so he could understand why his daddy has got one long arm and one short arm and hear it from me,” he says; at the same time though he is wary about delivering “a catechism from daddy”. That explains his joy on hearing Oliver return from playschool one day, saying he heard his father had lost his arm “fighting for freedom”.