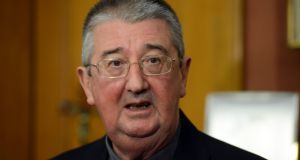 Archbishop Diarmuid Martin said it seemed those who were running mother and baby homes didn’t understand how to look after children. Photograph: Cyril Byrne/The Irish Times

The Catholic archbishop of Dublin Diarmuid Martin has called for a properly constituted commission to examine issues raised by the discovery of a mass babies’ grave in Tuam, Co Galway – including the allegation that medical trials were carried out on children.

Archbishop Martin also said the commission should investigate whether similar burials took place at other mother and baby homes throughout the State.

Gardaí have begun to examine the circumstances around the discovery of a large quantity of human remains at a site in Tuam, Co Galway beside a former mother-and-baby home run by the Bon Secours order between the 1920s and the 1960s.

Archbishop Martin said the indications were that “if something happened in Tuam it probably happened in other mother and baby homes around the country”.

Because of this he said he believed a wide ranging investigation was necessary.

“There is no point in investigating just what happened in Tuam and then next year finding out more. We have to look at the whole culture of mother and baby homes, they are talking about medical experiments [vaccine trials] there. We (also) have to look at the question of adoption,” he said.

“They are very complicated and very sensitive issues but the only way we will come out of this particular period of our history is when the truth comes out.”

Speaking on RTÉ’s This Week, he said it was very important that any investigation should be separated from the church and State or any other organisation that was involved “because there is an entanglement there that goes right through a period of Irish history. It is only an independent person who would be able to that”.

Archbishop Martin said such a commission should “perhaps be headed by a judicial personality” and he said he thought a person of the calibre of Ian Elliott whom he described as a “very strong” person in the the investigation of child abuse in the Catholic church, would be a very interesting addition to any such commission.

Archbishop Martin said while there were many diseases affecting childhood mortality, and bringing so many children together would spread viruses, there were issues about nutrition.

He said all the indications were “that those who were running those institutions didn’t understand and did not want to understand how you look after children and how you examine the special care that children need at that early stage”.

An inter-departmental historical review of mother-and-baby homes throughout the State is to be completed by the end of the month, Minister for Children Charlie Flanagan has said.

He was responding last week to questions on the Government’s response to the deaths of almost 800 children in the Tuam home, uncovered by local woman and researcher Catherine Corless.

The review group will include representatives of the Departments of Justice, Health, Children, Education and Environment.

The outcome of the Garda “scoping exercise”, begun in recent days as controversy around the site has increased, will determine whether a criminal investigation is required.