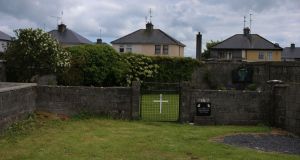 The site believed to be a mass grave for children who died in the Tuam mother and baby home. Photograph: Niall Carson/PA Wire

A consultant archaeologist and anthropologist has questioned whether the Bon Secours nuns could not have known the remains of 800 children lay on a site at the former Tuam mother and baby home.

Toni Maguire, who worked on the identification of the remains of 11,000 adults children and infants on a site outside Miltown cemetery in Belfast, said the first port of call in the investigation into the matter had to be access to documents.

“If the sisters are saying they were unaware that there were 800 children buried there, I would question that, especially if they were being funded per head,” Ms Maguire said.

The State paid religious orders running such institutions a capitation fee for those living there. Annual returns were submitted by the Bon Secours order at the Tuam home to the Department of Local Government and Public Health.

Speaking on RTÉ’s News at One, Ms Maguire said that in the Tuam case, the burials covered a span of “over 70-odd years”.

“These burials, the graves would have been left open for weeks, months and in some instances even years with just a wooden cover.

“So people could have come in at night if there had been mabye a home birth, a stillbirth or a miscarriage and other infants could have been variously added to these graves. So the true number will never really be known.”

The first thing required was to get the land surveyed, to bring in ground-penetrating radar and then to get the archeological team back in to do excavation work and determine the extent of the burial and associated burials.

“The sisters themselves would have records of people who were admitted to the homes, of babies that were born and babies who died. And then if it was a case of they were being funded for this, there must be a secondary route for investigating how many babies and mothers were they being funded to support over that period of time.

“So if the sisters say they haven’t got records, there have to be other routes to take that from.”

Ms Maguire said the work she and colleagues had carried out on the site that had been sold by Miltown cemetery was done “in full and certain knowledge that the burials were contained within that land”.

“Yet it took us a number of years to get surveys done, to get excavations done, which I have to say the church eventually paid for. But it was to establish that there were burials on the land that had been sold and for the church to then take that land back.”

Asked about the scale of the challenge in identifying the children at the Galway site and to what extent a certain amount of clarity could be established, Ms Maguire said it was “do-able”.

“But what you have to do is before any monuments or anything go up on the site and I know people are really passionate about it – we had that stage ourselves (at Miltown).

“But the land should not be disturbed in any way. If there’s a potential for archeological investigation of this land, with the potential of bringing in ground-penetrating radar, then any disturbance of the land can muddy the waters as far as the results go.”

Archeologists would then have to carry out test excavations.

“ Because if the sisters are saying they didn’t know that number of babies were there, then how far does the burial ground actually extend?”

Ms Maguire said she believed the home in Galway was originally a workhouse.

“So there’s the potential, because every workhouse would have had a burial ground, within the confines of the institution itself. There would also potentially have been a second burial ground at a later date, outside but close by.”

Asked about the possibility that drug trials were carried out on children in the Tuam home, as raised in the Dáil today, Ms Maguire said there was potential for further testing of any skeletal remains “to see if there’s any evidence”.

“ But that’s very up in the air and I wouldn’t put a whole lot of weight on that until we see what happens.”

Teresa Killeen Kelly of the children’s home and babies graveyard committee which was established to examine the possibility of erecting a memorial at the site, said the Bon Secours order had been “shocked” to learn there were 800 recorded deaths.

“They said also they didn’t know that that amount of children was there (on the Tuam site).”

Ms Killeen Kelly said members of the committee had recently met the order to inform it they were “there to make sure the project was done and someone has to take responsibility for that”.

The committee members felt “ it wasn’t dignified to have children buried in an area like that without their names”.

“As fathers, mothers and women ourselves we said we had children of our own and if anything happened our own we’d like a place to go to we would like to see their name...on a stone or a plaque or something to say ‘there lies our child’.”

Research by Tuam historian Catherine Corless into the operation of the home revealed that up to 796 children may have died there during the period of its operation from 1925 to 1961.

Records at Galway County Council list a very large number of deaths occurring at the home. In the 1970s, a large number of unidentified remains were discovered in a water tank close to the home, leading some to conclude that deceased children were disposed of in the tank without a proper burial or any records being kept on their interment.