Government treating subsidised transport as ‘charity’ rather than a ‘right’ , say islanders 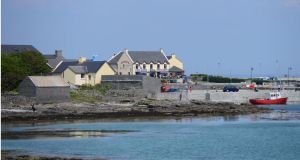 Inis Mór, the largest of the Aran Islands. The airlink involves subsidising islanders’ use of three daily return flights to and from Inis Mór on weekdays and two return flights at weekends

Aran islanders have appealed to the Government to avert cutbacks to their air link which could jeopardise the economic viability of coastal communities.

A new tender for the scheduled public service obligation (PSO) air service to the three Aran islands has put a cap on the overall cost at €900,000 annually, a 30 per cent cut.

Coiste leis an Seirbhís Aeir a Chosaint (Save our Air Service committee) delegates briefed TDs and councillors in Galway this week on the impact of the cap, which, they say, represents a “major downgrading”.

The 44 -year-old airlink involves subsidising islanders’ use of three daily return flights to and from Inis Mór on weekdays and two return flights at weekends, while Inis Meáin and Inis Oírr have two daily PSO return flights. Some ferry services also receive an annual subsidy.

The island committee says the PSO system applies to all islands and regions throughout Europe, but the Government is treating it as if it is a “charity” rather than a “right”.

Committee spokesman Michael Gill of Inis Mór said the cap on the tender was a new development, and one which would raise the price of tickets for islanders and restrict airport opening hours.

The tender also allows for use of both Inverin and Galway airports even though Galway airport is no longer licensed to handle aircraft, he says.

A study commissioned by islanders from NUI Galway and published a year ago found that the service for a population of almost 2,000 people compared favourably in value for money terms to other PSOs. It also emphasised that the air link served a “vital purpose”.

A separate study was undertaken by the Department of Arts, Heritage and the Gaeltacht which currently holds responsibility for islands. The department said its report showed that the subsidy for the air service had “increased substantially over the 10 years covered”.

“At the same time there was no increase in the number of passengers, or in the income generated by the service. It is recommended that more be done to reduce costs so that the service can be continued,”the department said, and there was a need to generate a “higher income” and provide a “lesser subsidy”.