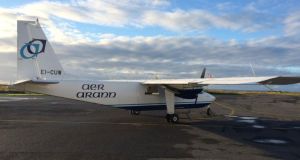 Aran Islands residents are to meet Minister for the Gaeltacht Joe McHugh on Thursday morning to discuss the ongoing controversy over the islands’ air service.

Islanders are concerned about losing a long-running fixed-wing airplane service after Mr McHugh said a helicopter firm operating out of Galway airport was the Government’s preferred tenderer for the State contract.

Residents of the three islands protested outside the Mayo constituency office of Taoiseach Enda Kenny on Wednesday afternoon and handed a letter outlining their concerns to his secretary.

The residents say Galway airport, in Carnmore, is inappropriate because it is 52km from the Connemara ferry terminal at Ros a’Mhil, compared to the 8km distance of Inverin airport, from which Aer Arann Islands operates the plane service. If the helicopter is cancelled because of weather it would mean passengers had to travel across Galway city to catch the ferry.

Cathy Ní Ghóill, an Inis Mór resident from the Save Our Service campaign group, said about 200 people turned out to demonstrate outside the Taoiseach’s office in Castlebar.

She said the Islanders would meet the Minister at 11.30am on Thursday. Islanders argue that the contract should not be awarded to the helicopter company because there is doubt over the future of Galway Airport.

Galway County Council, which controls Galway airport, last week said there was no agreement in place on the proposal. The current lease on the airport to Carnmore Aviation Ltd expires in December 2015.

A feasibility study on the future of the airport is being carried out and any recommendations it makes will have to be approved by the elected members of Galway City and County Councils.

Following a meeting with Islanders last week, Mr McHugh said the competition for the tender remained “live” and that “there’s no contract signed . . . there are opportunities for unsuccessful tenderers to make an appeal”.

Aer Arann Islands on Wednesday said it could not comment on the matter at this stage.