Anthony Foley funeral: ‘His family meant all to him’

The coffin of Munster rugby coach Anthony Foley is carried from St Flannan’s Church after his funeral service in Killaloe. Photograph: Clodagh Kilcoyne/Reuters

The coffin of Munster Rugby head coach Anthony Foley is brought to repose in St Flannan’s Church, Killaloe in Co Clare ahead of his funeral on Friday. Phototgraph: PA

The coffin of Munster coach Anthony Foley is carried into St Flannan’s Church by pallbearers for his funeral service in Killaloe. Photograph: PA

“We have been plunged deep into an incomprehensible darkness and sense of loss,” Fr Pat Malone said in his homily at the funeral of Munster rugby head coach and former player Anthony Foley in Killaloe, Co Clare.

A friend of the family, Fr Malone, parish priest at Castleclare said Foley lived his life “with great dignity and personal and professional integrity”.

And while he was a warrior and a captain and a coach, it was to Foley’s role as a family man that the funeral celebrant referred when he reflected on the man who died last weekend in Paris at the age of 42.

“His family meant all to him. Olive, you were his true love, and how good you and he were together. You complemented each other so well, ying and yang in perfect balance with each other.

“As parents together, you were second to none. My memories of Anthony as a loving, caring, and interested Dad, revolve around the magical family moments in the garden. Anthony pucking a sliotar with his kids, kicking a football, swinging a golf club and erecting a trampoline.”

Fr Malone also recalled a time when Foley, searching with his two sons, Tony (11) and Dan (8), for hens’ eggs, was an occasion of great excitement in the home.

“The excitement when they were found was shared and young Tony would look over the fence and invite all to the breakfast.

“I could see he enjoyed the different temperament of his two boys, and with the wonderful sports brain he had, he was silently assessing their temperament for future sporting engagement.

“These happy, cherished moments will hopefully in time offer many moments of pleasure to Tony and Dan,” he said.

Fr Malone said Foley had “made many a mark” in his short life.

“Just look around and see; the indelible, warm, affirming marks he left on family, friends, colleagues, sports fans, this local community, rugby wherever it is spoken of - to name but a few.” 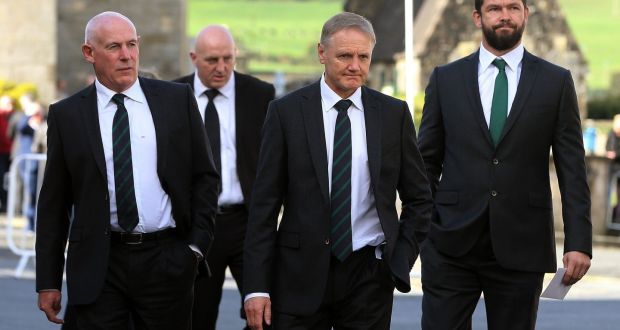 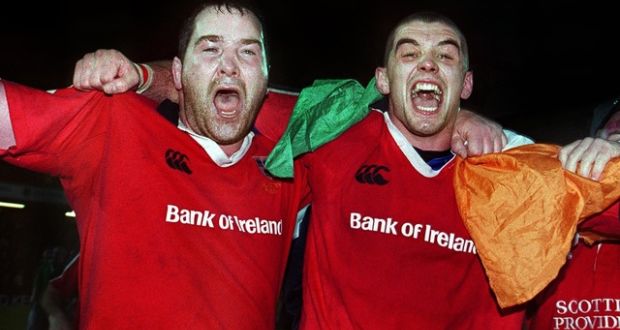 Fr Malone described Foley’s presence as “reassuring” and said his ability to care, his support and sense of camaraderie, “made all the difference.”

Those who knew Foley, “never walked alone”, he said.

In a brief moment of levity, he added: “I am fairly certain God could do with a top-class number eight.”

Olive Foley also paid a heartfelt tribute to her husband. She pledged to ensure that their two sons will grow up with the same values that made Foley such an inspiration to those who knew him.

“I was married to Anthony for 17 wonderful years, it was an idyllic life. Our home was so happy, a haven for all the important things in life. They say soul mates are eternal friends and if so, Anthony is my true soul mate – we were perfect together and he will never leave my heart.”

Foley’s former Munster team-mates Peter Clohessy, Mick Galwey, Keith Wood, and John Hayes helped carry him out of the church to his final resting place, as crowds of mourners applauded the sportsman home.

Thousands of people attended the funeral as family, friends, players, past and present came together to pay a fond and heartbreaking farewell to one of Munster’s greatest stalwarts.

The small east Clare village ground to a halt from early this morning with the main street bedecked in Munster and Irish flags, closed off from early morning to allow mourners make their way to the church at the top of the village.

And they came in their droves, not just former team-mates but Munster fans who wanted to stand with his grieving family.

Munster play Glasgow Warriors on Saturday at Thomond Park, from where Foley led Irish rugby to European success, and where his father Brendan was part of the famous 1978 Munster side that defeated the All Blacks.

Munster rugby has announced their plan to pay their respects to Foley on Saturday including a minute’s silence and opening Books of Condolence.

“On the pitch before kick-off, in recognising Anthony’s achievements and lifelong association with Shannon RFC, the Munster Rugby Supporter’s Club Choir will perform ‘There Is An Isle’, and soprano Sinéad O’Brien will join the Choir to perform ‘Stand Up And Fight.’

Staunton and Stack set for another campaign Down Under

Government to announce review of freedom of information legislation

Can Irish farmers reduce greenhouse gas emissions? 01:04
Local authority reforms propose ending right to individual desks and offices 01:00
Government to announce review of freedom of information legislation 01:00
Inmates being vaccinated on a prison-by-prison basis 01:00
‘He had no garage’: Offaly man’s €11m tax bill is the talk of Cloghan 00:10

4 Two teenagers died after separate incidents in Dublin and Waterford