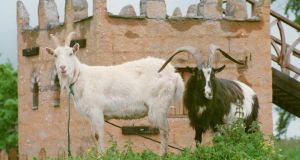 Animal rights activists are urging organisers of this year’s Puck Fair in Killorglin , Co Kerry , “to take the live goat out of the festival”, saying tradition can never be used to expose animals to physical and psychological damage. Photograph: Alan Betson/The Irish Times.

Animal rights activists are urging organisers of this year’s Puck Fair in Killorglin, Co Kerry , “to take the live goat out of the festival”, saying tradition can never be used to expose animals to physical and psychological damage.

The annual crowning each August of a wild male mountain goat, to reign over the town for three days and three nights dates back some 400 years.

The goat is crowned by a young maiden chosen from the community, paraded and then placed in a cage on a 60ft stand. Stalls line the streets and live music takes place each night in a festival which has broadened in recent years into family events, street entertainment and craft fair.

With pubs open late, and tens of thousands of visitors each year, Puck Fair is estimated to be worth €7 million to Killorglin annually.

A spokeswoman for the festival said hundreds of years of tradition and legend surrounded Puck Fair and “the goat is the festival”.

This year’s King Puck is an all white male goat. It was caught near Castlegregory in west Kerry some weeks ago and has been “acclimatising” to its environment.

The goat is “royally treated” and overseen by animal welfare officers, she said.

Aran, the Animal Rights Action Network , says their concerns span the range of the festival – the catching of a wild goat, parading it through the town and exposing it to noise and drunken revelry.

It believes the use of a live puck breaches “the five freedoms” safeguarded in the Animal Health and Welfare Act 2013, including freedom from discomfort, pain, fear and distress “and freedom to express normal behaviour .”

Aran spokesman John Carmody said the puck is a wild animal who doesn’t understand the loud noise, crowds of people or being hoisted into the air.

The wild-caught goat is “confined to a tiny cage, terrified and confused amongst thousands of party-goers and drunken revellers,” he added.

Aran rejected the Fair’s assertion that strict protocols are in place to ensure the welfare of the wild puck.

“No veterinary inspections will ease the psychological problems the animal will endure,” Mr Carmody said.

The Puck Fair festival begins on Monday next, August 10th with a horse fair, and will end on Wednesday with fireworks and the taking down of the goat.